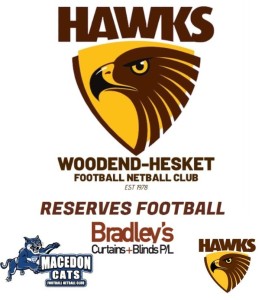 Talking Point
Macedon - it hasn't been the best season for the team who have battled injuries to players in the team and those at Senior level that have required a number of key players to move up. It can still make finals but needs to win every game on the run home.

Woodend/Hesket - it is starting to get back to some of that top form that it showcased in the early parts of the season. Its losses to the top two teams have been by small margins. The key for this group is to take down those above them as opposed to being competitive for most of the day. Has not beaten any of the top four teams in 2019.

Last time they met
Hawks coach Liam O'Meara kicked eight-goals and his team kicked nine goals in the final term to set up a strong 85-point win. Matt 'Chucka' Bourke was best afield for the winners while Stu O'Connor was best for the Cats alongside former Hawk Billy Chapman who kicked two goals.

Current Form
Macedon - has lost its last three matches. Had a big chance to beat Centrals several weeks ago in a bid to keep its finals' hopes alive but struggled in a 10-goal defeat. It hopes to recover from a 15-goal loss last weekend.

Woodend/Hesket - has won three of its last four matches. Faces the top two sides in the competition to close out the year. It should head into those games on a four-game winning streak based on form.

Why they will win
Macedon - it boasts some quality speed and experience with O'Connor and the Faria brothers who are very gifted, and it has the longest, most accurate kick in the RDFNL with Dan Trotta who can slot through goals from 70 metres on the run with ease.

Woodend/Hesket - Josh Smerdon and Max Ambler have been in fine touch up forward while Jimmy Chettle has been outstanding in the midfield. There is a lot of experience in this line-up that can play to a high standard.

Why they will lose
Macedon - it does lack depth and experience to finish games off.
Woodend/Hesket - it can easily underestimate the opposition especially on a bigger ground.

Who will win
On paper, Woodend/Hesket is at least a seven-goal better team with so much experience and depth. It has the luxury of playing several Under 19.5s players if needed to give them some experience and dominance against bigger bodies.