ROUND 11 Review | B Grade Netball 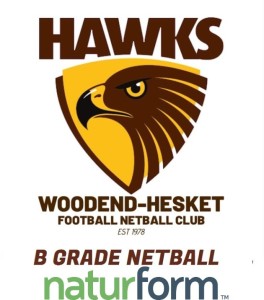 With Rupo presenting its B Grade team with a combination of A Grade and talented U/19 players, Woodend/Hesket knew they had a big workload ahead of them, going down 21-53.

For Bonnie and Emily they had an opportunity to play against athletic, tall defenders. With this in mind, the timing and angle of their leads would either result in success or be lost through Rupo interceptions.

Throughout the initial first quarter, court play was positive with the right lead and the correct pass being made, scores on the board appeared.

Defence was tight in the back line with Tegan tagging a player with similar attributes, speed and determination, there was a one on one game just between the two of them!

Taylor and Shae kept working away trying reposition the Rupo shooters, however with the ball coming though the centre court so fast, it was difficult to intercept the ball.

Rylee came onto WA in the second quarter with Chelsea still playing the centre position. Both these players worked hard to create space with strong leads into the shooting third, however Rupo’s speed took the interception when the lead and pass did not connect.
By half time, Rupo had pulled away from us.

In the second half of the game, positional changes were made. Louise came on into GS and Bonnie was sent down into GK to reposition the dominating Rupo GS. Being a little bit taller and faster on her feet, this was an effective move.

Shae now out as GD the physical presence in the ring was stronger. These two players would remain in these positions for the rest of the game.

In the mid-court, speed on leads which would create space for passes was still a concern. Rylee, Chelsea, Taylor and Tegan all worked hard; however, it was Rupo’s visual pressure on our pass that saw the Hawks players narrow their own vision when looking for leads and pass selection and in turn lose possession of the ball mid court.

Louise and Emily having never played together also worked hard, always trying to be in a winning position to score goals.

Rupo’s performance was not error free, however, they reminded us how much more work is required here at Woodend-Hesket to get to their level of skill and fitness. What we didn’t win on the score board, we won from sportsmanship and team. Go Hawks!