ROUND 11 PREVIEWS | 19 and Under Netball 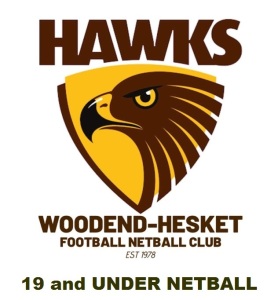 Talking Point
Rupo – this team have been unbeatable for 100 games in a roW, not losing a game since the 19/u competition was introduced into the RDFNL. It has a large list of seasoned netballers hoping to make it 101 unbeaten games and is currently sitting top of the ladder.
Woodend/Hesket - the young Hawks are sitting second on the ladder by percentage is also full of very talented players ready for one of its biggest challenges. It welcomes back Sarah Duff from her ACL injury and will be very keen to stay in the hunt to secure the second chance come finals time.

Last week
Rupo –  had a club Bye. Defeated Romsey 46-15 in its previous outing to notch up its 100th straight win in convincing form.
Woodend/Hesket – the Hawks had a Bye due to Rockbank not having a 19's netball team. Defeated Broadford in an unexpectedly close game 26-23 in its previous outing. A lapse in the middle two quarters made it difficult but a strong first and last quarter secured the win.

Why they will win
Rupo - this is a formidable team and they will have their best team on the court, determined to surge another game clear of the Hawks on top of the ladder.
Woodend/Hesket – this team will need to concentrate and play at their best for the full four-quarters to knock Rupo off its perch – they are good enough to win. It will be a tough ask with their key shooter Gemma Baird out this week but with Madi Kleiner coming up from the 17's to fill in and Sarah coming back into the fold, will give it a red hot go.

Who will win
Woodend/Hesket!!!
This is last years grandfinal rematch where the Hawks went down by only seven-goals in a very tough contest.

The Hawks team need to believe in itself and treat this as any other game - with the belief they can win. If they play each quarter with intensity and determination and concentrate for the full four-quarters, they may just surprise themselves and Rupo!