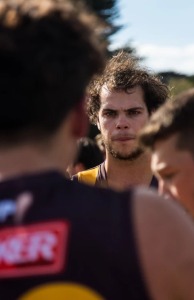 | Chris Yeend |
Photo : Ties Urie Photography
SENIOR FOOTBALL
Talking Points
Woodend/Hesket - Fans are continuining to see the same patten for the Hawks week in, week out in 2019, compete early and then fade when the game is on the line. This happened again last week when Wallan kicked eight goals in the third term to end the contest and win by 58-points. This team still has plenty of youth in its list but it needs to play four quarters, something that it hasn't done since its opening round win over Lancefield.
Riddell - How will this team respond after a disappointing loss to Rupertswood in the season's first highly anticipated blockbuster? The Sharks matched them goal-for-goal and led at every change to seal a solid five-goal win.
Current Form
Woodend/Hesket - It has lost its last five games and has not tasted victory since the opening round of the season. A list with solid potential has really struggled to deliver in 2019 and it needs a scalp to get its season moving.
Riddell - Its best is outstanding and its worst can appear flat. It seemed flat in stages last week in its first loss in a month. Its hat-trick wins leading into the game against the Sharks ignited the flame that burned brightly for more than a dozen weeks in 2018.
Why they will win
Woodend/Hesket - If it plays hard and competes strongly across four quarters and takes the challenge to Riddell's big guns in its defense, it is a chance. Riddell lack that strength down back, so look for Tom Gawthrop to put in a herculean-performance with five or six goals and hopefully guide his team to victory.
Riddell - There is so much class across every line. Last week could have been a small blip on the radar for its quest to climbing back up the ladder as a genuine threat in the competition. Haydn Ross is one of the best players this team has produced in recent years and he will lead by example.
Why they will lose
Woodend/Hesket - Confidence and form don't seem to suit victory for this team. The midfield has yet to really take a game by the scruff of the neck in the last month and it is up against a solid midfield.
Riddell - Losing Liam Reid to the VFL last year definitely hurt, and it lacks that height right across the ground. It is facing a team that is yet to produce its best this year but is most capable of causing an upset. If the Hawks play at its best and Riddell is off its game in any way, it could spell trouble.
Who will win
Riddell has beaten Woodend/Hesket in every encounter since perhaps the 2007 Grand Final? That's a long time between drinks for the Hawks and more than a decade of dominance for the Bombers who will likely secure its fourth win of the season.