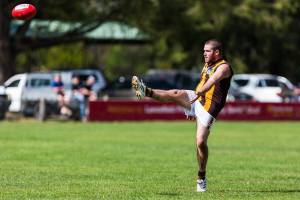 | Chris 'Yeendy' Yeend|
RESERVES
Talking Point
Wallan - The reigning Grand Finalists did a magnificent job to secure its undefeated start to the season with an impressive effort against the Cats last week. This team is more than 70 goals better than the next best team (Riddell) this year after sending home 84-goals in 160-minutes of football in the opening two weeks. That's not a statement to make after kicking just one-goal in a losing Grand Final in 2018.
Woodend/Hesket - This list has really impressed under new coach Liam O'Meara and the depth that the squad has is outstanding. To sit second on the ladder after six rounds with four wins from five games (as opposed to the Seniors who have one win from five) is testament to what this squad can produce. It faces its biggest challenge this weekend against the undefeated Pies.
Last week
Wallan - Luke Zeralla kicked eight goals and Brandon Muldoon was outstanding as it held Macedon scoreless in the first term and then kicked eight unanswered goals in the third term to set up a 108-point win.
Woodend/Hesket - A tough day for the Hawks with just one goal in the first half. They trailed by 14-points at half-time with more scoring shots on the board against the reigning premiers. Despite the disappointing 29-point loss, the signs were there against a super side with Grech and McCoy outstanding and veteran Chris Forde unbeatable.
Why they will win
Wallan - With the best midfield and forward line in the competition, it is hard to see where this team can be beaten. With its onslaught of the competition, it has beaten contenders Diggers Rest, Rupertswood and Riddell, quality opposition.
Woodend Hesket - If it can keep it to a low scoring contest and embrace the wet weather conditions with hard-hitting football, there is no reason why it can't push the Pies and get the win here. It's second on the ladder for a reason, for being competitive and playing well.
Who will win
Wallan has beaten everyone around them so far this season and until it drops one game, it's hard to see where its flaws are. If the Hawks can stay within five-goals when the final siren sounds, it will be a small victory in some way.