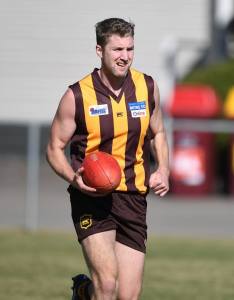 WALLAN v WOODEND/HESKET
Talking Point
Wallan - This team should be in the top three but now finds itself out of the top six. This is a talented list that has missed some golden opportunities to take the competition by the scruff of the neck. It took down Rupertswood earlier this season in one of its better wins in recent times. Its best is unbeatable. Where is that touch?
Woodend/Hesket - There is potential in this list but what does it need to be competitive for four quarters and overrun quality sides? It has played maybe two or three solid quarters in matches against Macedon and Diggers Rest but fallen away at crucial stages. What does this list need to work harder for longer?
Current Form
Wallan - Two big losses against Macedon and Riddell in consecutive weeks following its big win over Rupertswood. The Riddell loss hurt considering the margin (76-points) and had a chance to win against Macedon last week after leading for much of the day.
Woodend/Hesket - Has not tasted victory since its opening round win over Lancefield. It has been competitive in parts of matches but needs to convert those competitive moments into wins.
What happened last game
Wallan - It led Macedon for much of the game before conceding four last quarter goals to lose a thriller by six-points. Mannix and Perri shared six of the nine goals while Ricky Schraven was outstanding. It was a missed opportunity.
Woodend/Hesket - Competitive in the first half, it conceded eight goals to five in the second half to go down to the Burras by five-goals. A strong, competitive effort by the Hawks but needed to dig deep and cause the upset. Gawthrop kicked three goals while Slater and Stapleton kicked two each.
Why they will win
Wallan - It plays well at home and hasn't played too badly aside from its loss to Riddell. The move from Doc Mannix to the forward line is a good one and adds more variety to the likes of Perri and Fowler. That three-pronged attack is dangerous.
Woodend/Hesket - If it can just play four quarters and not let the opposition slip away in quick patches, it will be a threat. The potential is there, but like Essendon in the AFL, hasn't quite produced it for longer periods of time to secure wins.
Why they lose
Wallan - Woodend/Hesket play to its potential and it plays to its current losing form. It can't afford to lose this one and the pressure mounting should it lose will potentially open up a greater gap between teams in the top six and those outside of it.
Woodend/Hesket - When was the last time the Hawks tasted victory at this ground? It's been a very long time and it has come to this ground in good form with the promise of winning and fallen away badly. Its current win/loss form hasn't been overly pleasing as it heads to Greenhill Reserve, will it continue that struggle?
Who will win
If Wallan win, its back into contention and the Hawks will face a massive challenge to make finals. Wallan should rebound here and get back to that brilliant forward and midfield dominance with a solid victory and set itself up for a good run through the mid-season.
Next Four Games
Wallan - Melton Centrals (A), Lancefield (H), Romsey (A), Rockbank (H).
Woodend/Hesket - Riddell (H), Broadford (H), Rockbank (A), Rupertswood (A).