Round Six Previews | Under 19.5s Football 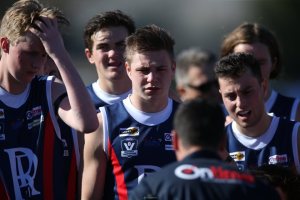 What happened last game
The Hawks had a slow start against the determined Tigers, edging out to a three-point quarter-time lead. They kicked away in the middle quarters with 9.11 to nil to eventually set up an impressive 62-point win, 13.16.94 to 5.2.32. Ten players shared 13 goals with Burnip outstanding alongside Urie. Bell kicked four-goals for the Tigers.
This week
Third placed Woodend/Hesket take on fifth placed Diggers Rest at home. This is the first of three meetings between the pair in 2019; with the next to take place at home on Saturday, June 22.

The pair met just once in 2018 with the Hawks enjoying a 19-point win in a match that had 25 goals kicked, the most in a game featuring the Hawks in 2018.

The Burras come into this game on the back of a 39-point win over Centrals at home. Dave Tyquin was one of the stars with three-goals and Daniel Rodger was outstanding. These two will be tough to contain, especially Tyquin who is one of the break-out stars of the competition.

Looking to the Hawks, James Burnip has been a handy pick-up for the club in 2019 after standing out as a quality junior at Macedon. He has played just two games for the club and made his mark with a best on ground performance against the Tigers.

Harley Giddings had a solid hit-out against the Southern Football Netball League last weekend and has produced an impressive 12 goals from three outings this season.

This is an important game for the Hawks to establish some dominance over the competition and embrace an undefeated start to the season. Wallan awaits them next week while the top two teams, Riddell and Rupertswood play off against each other at the same time.

A win over Diggers Rest and Wallan over the next two weeks could see them in a blockbuster battle against a potentially undefeated Riddell in Round Eight at the Nest in a battle for top spot.