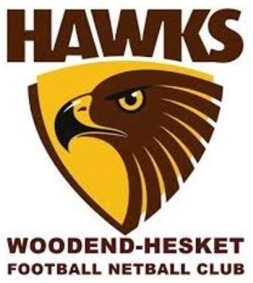 Proudly brought to you by:
The Undiscovered

First twilight round of the year and the reserves boys looked to kick-start their season with 4 straight wins. In what was built up as the biggest matchup thus far, everyone was anticipating a big turn out.

As expected, the Hawks showed up hungry for victory and put on a dominant performance for the crowd. A strong team effort allowed for an 85 point victory at home against Macedon, putting the Woodend/Hesket reserves 4-0 and second on the ladder.

Post-game we caught up with star forward and coach Liam O’Meara for a quick insight into the game:

“We come out and put an emphasis on that first 10 minutes in the first quarter. We came out hard and knew we had them early on and were lucky enough to kick I think 5 goals to 1 which was really pleasing.
Having said that though we knew the test for us was going to be the second quarter because we have struggled there in the last couple of games. So we really put the pressure on the boys to make sure we weren’t going to be one of those teams that drop off in the second quarter.

To everybody’s credit, we did that and went into halftime with a nice lead and everyone was up and about. Unfortunately in that third quarter we probably had a chance to put the game away, but we didn’t, we kind of let them back in and gave them a sniff. I think we were 4-5 goals up and 3QT so it was there for them if they wanted to take it. But to our credit we really broke them in the first 5-10 minutes of the fourth quarter. We were good enough out of the guts and used the ball really well, I think we kicked 7-8 goals in the last quarter there to win by 85 points.

That’s how we want to play, we want to play with space in the forward line and we want the mids and the half forwards to be looking inside the 50 for the target. Now whether that’s me, or Max, or Kizz, it doesn’t matter who it is, but if that’s working then that’s how we wanna play. Win the contested ball and then get it forward quickly to our one on one’s. It showed there in the last quarter that when we break a side and really open it up we can put them away.

Good win against Macedon, we haven’t won many games against them over the past 5, 6 to 7 years. We took another step up the ladder today and now our biggest test will be next round against Diggers Rest.”