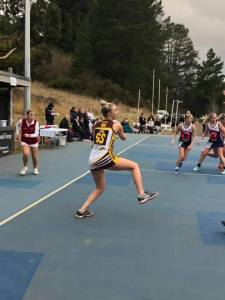 B GRADE
With a late afternoon game held at GG oval, our first home game for the season, the WHFNL B Grade team began against Macedon at a steady pace. Play between both clubs appeared to be well matched with equal amount of errors made and goals scored.

With Claire Klusik taking up the GK position, Shae Denahy made her debut in GD position, this defending marriage was strong and dynamic.

Tegan, thanks to her speed resumed her WD position with Taylor settling into the C position. In the shooting circle Emily and Bonnie worked hard to understand the defending style of Macedon, while Chelsea was productive in the WA position.

Our play was strong in defence, bringing the ball down into our attacking end. However, Macedon’s defence caused the available space to disappear when placement of pass was delivered into the circle. Macedon won this quarter by six-goals.

A number of positional changes were made at the break to stay in the game. Rylee came into GA and with her speed she created space by keeping her player busy. This allowed Chelsea and Tegan, now in the centre position the ability to place the ball into Emily which resulted with scores on the board. Taylor went into WD, this created more visual pressure on the WA passes.

The defending backline was tall and agile. As this quarter progressed and goals being scored at an equal rate, it was up to the midcourt to gain possession of the ball. We only lost the second quarter by three. We had progressed in our attacking end with success in placement of passes while our defence settled in knowing that for the rest of the game their workload would continue.

In our third quarter, the line up stayed the same. Macedon continued to score goals, while Claire and Shae worked hard, trying to reposition the shooters out of their preferred position. Macedon’s accuracy at times tested our belief, however, Claire and Shae did not give up. Emily by this stage was also being physically challenged. She continued to move in the circle which caused Macedon to be penalised with shortening of distance. Unable to break back and slow down Macedon’s scored shots they won the third quarter by five goals.

Entering the final quarter; captain, Bonnie came back into play as GS, while Emily came out as GA. With Tegan having worked extremely hard in a defending capacity, and then in the next breath went into attacking play, she was moved into WA, with Chelsea taking the centre position to maintain our speed through the mid-court. Our back-court continued to work hard. However, Macedon had really kept their momentum going and surged ahead, winning the final quarter by ten.

The scoreboard did not reflect the competiveness of the game. We have performed at a higher standard and have halved our loss from the 2018 season.

To improve on this result, basic skills need to be played at a strong level, belief in ourselves and commitment to improve both at a personal level and as a team.

We need to disperse the black Macedon cloud that arrives when we step on the court against them. I know it is hard as their presence is quite intimidating, however, I focus on the small successes we achieved in each quarter, knowing we can and will build on them. Go Hawks

A GRADE
The WHFNC A Grade team have slowly collated game play information on the Macedon team over numerous seasons. Its fundamental style of game has not changed dramatically over three seasons. We are still learning how to play them and they in return remind us of the skill set we need to improve on and so the dance continues.

Tara Burnip began in the GS position in her first game against her old club. She began the game a little nervous and unsure how to play against their athletic, knowledgeable GK. Maddy Staresina opened in GA, with Gracie running WA and Brittany accompanying her in the Centre position. Shannon, Abbey and Ally began their defensive battle to shut down Macedon’s strong set plays.

With Macedon scoring off all their centre passes and capitalising off our passing errors Macedon slowly developed their momentum. Macedon won the quarter by 10.

With a netball leadership meeting held a couple of weeks ago, it was decided if a win wasn’t possible, court rotation would be utilised, allowing new line ups to be tried. This was implemented into the second quarter. Jess came into GA and with our captain Shannon retiring from the game due to illness, Macca came into the WD position.

In our attacking end, Tara tried a different style of game, more of a holding game, with well placed passes into her, goals were scored and confidence emerged. Jess being a left hander, caused confusion due to her different directional leads. At times Ally and Abbey did rebound missed shots and with Macca’s assistance brought the ball down through the mid court. At the end of the second quarter, we scored more goals on the board, however it was our vision, pass selection that allowed Macedon to win that quarter by 11.

Entering the third quarter, even though Macedon had a large margin on us, Maddy came into WA, Abbey went out to WD, Ally into GD and Macca GK. There was logic in these positional changes. Macca has the speed and intense defending skills to tag the GS, this gave Ally a chance to play out as GD which also saw her assist down court when we did gain possession of the ball. Abbey having played WD previously became a visual deterrent while stopping the WA driving onto the circle. Maddy's choice of passes into the circle was successful at times.

The combination of Tara, Jess and Maddy had never been played and this playing relationship will develop with time. By this stage of the game, Macedon too was trying a different attacking combination, however errors did occur and we celebrated the interceptions and the additional goals on our score board. Macedon won this quarter by ten.

In the final quarter, Tara retired injured which allowed Maddy to return to GA, Jess into GS Brittany came into WA, with Gracie running C. This too was a new combination. Macca now playing GD followed the Macedon GS out to GA, while Abbey had an intense cat and mouse game with the WA. Ally returned to GK.

Our A grade team even though they knew Macedon had won the game, did not give up in this quarter. All players kept trying to find the space in attack to deliver successful passes and score goals. The players continued to defend, however it was Macedon’s strong set plays, well placed passes and high accuracy of goals that won them the game.

The previous time we met Macedon during the 2018 season our lost was greater. This year, round five, with two new attacking players in our A grade team this loss was not as damaging. The stat sheet show where we loss possession of the ball. We can match Macedon’s physical game, however, we need to lift our work rate, not play obvious simple passes into experienced defenders. We also need to unite in our approach, support each other’s on court success. Mind set leading into these big games starts at training.

Ladies well done, I know it doesn’t feel successful, however, it’s what we’ve learnt from this loss, that our Macedon file of knowledge helps us next round. Heads up, their gift to us was ... we need to work hard at training.