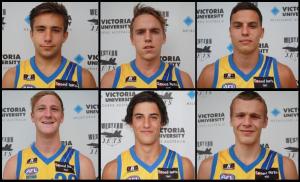 The Western Jets have announced a six man leadership group for the 2013 season. Luke Pulitano, Jake McKenzie, Jake Greiser, Harrison King, Daniel O'Leary and Brett Bewley have made up the group.

The process involved both players and coaching staff rating each player on leadership attributes and players giving presentations about their leadership quilities.

Jake McKenzie is the only 19 year old player in the leadership group with Jake Greiser, Harrison King, Daniel O'Leary and Brett Bewley the four top age players selected. Luke Pulitano is the only bottom age player which speaks volumes of the way his peers perceive his leadership qualities.

It was impressive with an excess of 25 players self nominating to be involved in the leadership team. We wish Luke, Jake, Harrison, Jake, Daniel and Brett all the best in their roles and look forward to the announcement of the captain in the coming week.

A New School of Thought