Siblings have shone over the year for the Pioneers 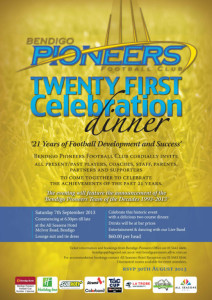 MANY brothers have made their mark over the years with the Bendigo Pioneers Football Club.

Two of the most recognised families in the club’s 21-year history in TAC Cup action are Geary and Selwood.

Four brothers from each clan racked up many kicks, handpasses, marks and goals for the Pioneers.

The Gearys from Eaglehawk have achieved a unique feat in the club’s history.

Daniel, Shannon, Jarryn and Kallen all starred for the Pioneers.

Now playing for St Kilda in the AFL, Jarryn was the Pioneers club champion in 2006.

Two seasons after Jarryn earned the Neville Strauch Memorial trophy as the club best and fairest, Kallen was Pioneers champion.

A skilful wingman or onballer, Kallen repeated the feat in 2009.

The first of the Gearys to play for the Pioneers was Daniel.

Shannon is now captain of the Storm where his in-and-under style and superb skills by hand and foot have set up or finished off many attacks.

Before he joined Storm, Shannon had played for Eaglehawk, Sandhurst and Kangaroo Flat in the Bendigo Football League.

All four Selwood brothers kicked on from being Pioneers to play in the AFL.

Their tally of matches in the big league passed the 500 mark earlier this season.

Twins Adam and Troy were drafted to West Coast and Brisbane Lions respectively in 2002.

Adam has played more than 175  games for the Eagles.

A career high was West Coast’s premiership victory in 2006 against Sydney.

Troy played 75 matches for the Lions.

He took up a key off-field role with Geelong Football Club in 2011, but has continued on to play on in the VFL.

Troy was captain of the Cats team which won the VFL grand final against Port Melbourne last September.

An incredible debut season in ’07 by the brilliant onballer was capped by a grand final victory against Port Adelaide and the AFL’s Rising Star award.

Joel was among Geelong’s best in the premiership wins against St Kilda in ’09 and Collingwood two seasons ago.

Now in his second year as Geelong’s captain, Joel recently joined the ‘150 Club’.

Scott Selwood reached the 100-game milestone with the Eagles earlier this year.

Drafted to the west in 2007, Scott capped a breakout 2012 season by winning the Eagles club champion award.