Rivals Clash in School Football at the QEO in Bendigo 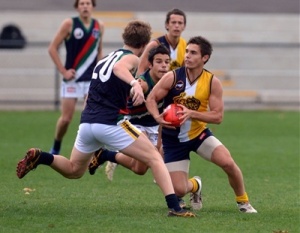 THEY carried underdog status before last year’s upset victory and Catholic College Bendigo is happy to do so in today’s Premier League football clash with Bendigo Senior Secondary College at the QEO.

Although the BSSC Lions have many Bendigo Pioneers in their squad, CCB captain Seb Greene is not daunted by today’s clash with their arch-rival.

When they met in last year’s SSV campaign, Catholic College Bendigo outplayed and outran the Lions at Weeroona Oval.

Although the line-ups have changed,  Greene said he and schoolmates who played in that victory believed they could do so again when today’s match begins at 1pm at the View Street ground.

This year CCB is being coached by Bendigo Gold’s Aussie Jones, whose mantra is be prepared to take the “game on”.

Greene said midfield contests would be a key to CCB’s chances.

CCB will look to Tom Broadbent, who played his first senior game with Sandhurst at Gisborne last Saturday, to lead the way from the centre of the big ground.

Greene will team at the centre bounces with Broadbent, ruckman Harrison Crone and rover James Coghlan.

In attack, Billy Evans from the Bendigo Pioneers and Dooley Niemann are CCB’s key targets.

The versatile Blake O’Halloran  plays a crucial role for the Lions.

O’Halloran was best afield as he played at centre half-back in BSSC’s first-round win against Lakeview College at Golden Square’s MyJet Oval.

“It was a hard-fought match,” O’Halloran said of the seven-point win by a team of which Bendigo Pioneers coach David Newett is in charge for a second year.

“To be a chance for the finals we have to win this match.

“Quite a few of us played in last year’s loss to CCB, and we don’t want that to happen again,” said O’Halloran.

“There’s a great rivalry between the colleges in all sports.”

Whether he’s in defence, attack or in the ruck, O’Halloran is likely to lock horns with a Pioneers team-mate, such as Evans, or with some like Greene who he played in an under-18 premiership with at Sandhurst last September.

The Lions have the same mindset as CCB in being prepared to take risks.