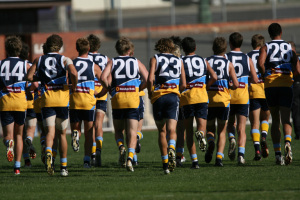 Led by the play of Kyneton’s Jordan Mangan and Castlemaine’s Josh Cakitaki across half-back, skipper Jacob Chisari from South Mildura, Sandhurst’s Harry O’Meara and Lalbert’s Jake Maher through the centre and across midfield, the Pioneers won 12.18 (90) to 7.6 (48).

It was the club’s first victory since the Ollie Wines and Jake Stringer-inspired 10-point triumph against Northern Knights on July 14 in last season’s 13th round Huntly’s Strauch Reserve.

Although they had 15 players in their first TAC Cup under-18s clash, the Pioneers teamed superbly after a nervous opening to the 2013 campaign.

North Ballarat capitalised on a stiff breeze to lead 12-nil after less than five minutes.

Both of the Rebels goals were taken after two marks inside forward 50m.

Bendigo’s defence tightened up after the early onslaught to concede just two more marks inside the Rebels attacking 50m for the rest of the contest.

Bendigo made a brilliant start to term two.

Byrne passed to Chisari who in turn handpassed to the pacy O’Meara to goal on the run from near the 50m arc.

The Rebels replied to lead 19-12 after five minutes.

A series of passes by the Pioneers was capped by a mark and goal to Irymple’s Bryce Heeps.

Mangan’s tap at the next centre bounce ended up with Bendigo winning the centre break and the first of three goals by Sandhurst’s Alex Hywood to take the lead in the 12th minute.

A superb kick-in by Lockington’s Trent Bacon after a Rebels point set off an attack down the outer wing from which Blake O’Halloran marked and goaled to lead 30-20 in the 15th minute.

The Rebels intercepted a kick across ground near centre half-forward and goaled.

It was one of few errors the Pioneers made in transition from defence to attack.

Bendigo hit back with consecutive goals, which included one by O’Meara on the run to lead 43-26 at half-time.

The Pioneers won the crucial third quarter by 14 points.

Highs included Chisari’s brilliant roving and quick handpass to O’Meara in the clear to kick his third major.

Kyneton’s Daniel Davie was rewarded for his chase and tackle with a goal, while South Bendigo’s Blake Poyser intercepted a pass from which the Pios attacked and Hywood goaled.

The Pioneers did most of the attacking in the final term.

O’Halloran and Hywood were on target in a quarter where several shots at goal were askew.

While it was second-year players such as Chisari, Mangan and O’Meara who stood out, a lot of the Pioneers newcomers showed a lot of skill and poise under pressure.

Shortly after they had sung “We Are The Pioneers” with gusto, coach David Newett praised the team for its intensity, workrate and determination to win a lot of one-on-one contests against the Rebels.

“Every player contributed to this victory. It’s a fantastic feeling to start the season with a win,” Newett said.

“We showed today that by getting the ball into space and using our pace and skills that we can open sides up.

“Today is reward for effort for all the work you have put in. The challenge is to go again next week,” he said of facing Murray Bushrangers on Saturday at Shepparton’s Deakin Reserve.