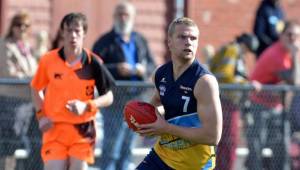 After a year of greater team success, a number of Bendigo Bank Pioneers players are beginning to receive recognition for outstanding individual seasons.

Sandhurst’s Harry O’Meara has been invited to test at the Victorian AFL draft combine on October 6, while his Dragons team-mate Isaiah Miller and Kerang’s Jaden McGrath have been included in the AIS-AFL Academy program.

O’Meara will be one of three Pioneers put through their paces for AFL ranks, with captain Oliver Wines and Jake Stringer certain to be invited to the national combine.

“He’s got a good burst of speed, he can break lines and break games open. His highlights reel would be as good as anyone’s,” Newett said.

At least three AFL clubs showed an interest in O’Meara for him to be invited to the state combine.

Five or more AFL clubs must be interested for Echuca’s Wines and Eaglehawk’s Stringer to be invited to the national testing, which will be announced soon.

Wines, in particular, impressed playing for Victoria Country at the national under-18 championships this year.

The mid-sized midfielder, who prides himself on winning contested ball, has been touted as a potential top-10 pick at the national draft.

Stringer’s versatility is sure to be attractive to recruiters, with Newett declaring the 191cm rising star has “plenty of upside”.

Stringer missed a year of football with a broken leg, but made a big impact on his return for the Pioneers this season when he booted nine goals against the Northern Knights.

The injury caused him to miss a trip to Europe with the AIS-AFL Academy last season, while Wines travelled with the squad this year.

Key defender Miller has been added to the Academy’s under-18s squad, which will travel overseas early next year, while Victoria Country under-16s representative McGrath is part of the 17s squad.

Miller is in contention to be drafted in this year’s mini-draft after he was amongst 16 players nominated by Greater Western Sydney.

While McGrath, 16, is likely to make his debut for the Pioneers on Saturday against the Western Jets at Epsom-Huntly Reserve.

In addition, five Pioneers played in a trial match for Victoria Country under-17s versus Victoria Metro on Sunday.

“Chisari was very good, he played really, really well. Jonty played alright, which was good and showed some signs,’’ he said.

“They all did OK, but ‘Chisa’ was one of the standouts for the Vic Country squad.

“It was good though, it was good to see how the boys go against that next standard and I thought our boys handled themselves really well.”

Miller and Strathfieldsaye’s Luke Marchesi are also in the squad, but didn’t play in the match.

“They’ll always add to it and there was eight guys that didn’t play on the weekend because they played nationals, but we had seven representatives so we’re pretty pleased with that.”

The Pioneers will hold trial games next month as the club decides which players to invite to pre-season in November.

“That’ll be an indication (of the list), because a lot of those boys we’ve seen play but we haven’t seem them play against better quality,” Newett said.

Victorian under-16s Danny Jones, from Mildura, and Swan Hill’s Jake Maher are two of the new breed of Pioneers for next season who have made their debut in recent weeks.

They will be joined by McGrath this weekend as the Pioneers release some players who need to qualify for BFL seniors finals.

“It’s just giving those kids an opportunity to see where the level’s at, because we’ve got some other players that are playing local club footy now that will allow them to play senior Bendigo finals footy, which will be good for them,” Newett said.