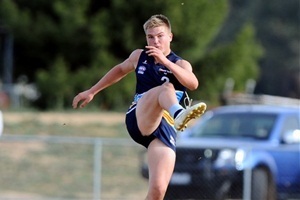 Wines, 17, capped an outstanding AFL national under-18 championships by being named in the centre for the All-Australian team.

The young gun from Echuca starred in all four matches he played for Victoria Country.

“To be selected in such a prestigious group was a great honour,” Wines said yesterday.

“A goal was to play as well as I could in every match,” Wines said of being in the Mark Ellis-coached Victoria Country team, which finished with a 2-3 record.

Wines was joint winner of the team’s most valuable player award.

“Leading into the championships the aim was to be consistent in every quarter,” he said.

“For the Pioneers, I would have a hot half or two, but then not have much of an impact as I had been. Consistency in games is something I have really worked hard at.”

The year 12 student at Goulburn Valley Grammar has covered plenty of territory to train and play.