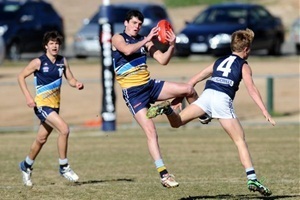 A 10-MINUTE burst in which a 10-point lead became an 18-point deficit cost the Bendigo Bank Pioneers in Saturday’s TAC Cup clash with Geelong Falcons at Strathfieldsaye.

Playing at the Tannery Lane for premiership points for the first time, Bendigo led by five points at half-time.

A goal by Strathfieldsaye Storm’s Luke Marchesi put the Pioneers up by 10 points at the 10-minute mark of the third quarter.

But from there the game swung dramatically as the Falcons won most centre breaks and continually pumped the ball into attack.

The Falcons scored seven unanswered goals and led 61-43 with a quarter to play.

Bendigo added 3.3, with a highlight being Bell’s dash from through the centre and running goal.

The Pioneers finished strongly, but Geelong led by 14 points when the final siren sounded.

Although bitterly disappointed not to have won, Pioneers coach David Newett said it was another fine performance by the team.

“Again it was a lapse in concentration and not being able to match the opposition’s intensity that really hurt us,” Newett said.

“Other than those 10 minutes in the third quarter, we matched Geelong in terms of pressure and ball use.

“At times we linked up really well from defence to attack and scored some excellent goals.

“We did a lot of attacking early in the third quarter, but missed shots. Geelong didn’t.”

Both line-ups had changed markedly since Geelong beat Bendigo by more than 10 goals in the season opener.

“We showed today that we had learnt a lot from the previous match,” Newett said.

“Our workrate to limit their run and force mistakes was at a really high level for a lot of the match.”

Newett praised Chisari’s play through the centre and at stoppages.

“He has really stepped up the past month,” Newett said of the first-year player.

“With Ollie Wines (Vic. Country), Jacob Heavyside and Liam Byrne (injured) being out for a lot of matches, Jacob has taken on a leadership role and been really consistent for us.

“His tackling and second and third efforts are excellent, as is his disposal.”

Mangan competed well in the ruck in every quarter.

“He has an incredible work ethic, took a lot of contested marks and his follow-up work from hit-outs was excellent.”

The run and creativity by Bell, Strathfieldsaye’s Vinnie Flood and Golden Square’s Comanche Walls through midfield and across half-forward set up many scoring chances, while Isaiah Miller was strong in defence once again.

Next Saturday the Pioneers travel to Huntly’s Strauch Reserve to tackle Northern Knights.

Bendigo will regain Wines and Jake Stringer from Victoria Country commitments, as well as Moama’s Christian Burgess and Wentworth’s Samuel Clyne, who played for NSW-ACT in the national under-18 championships.