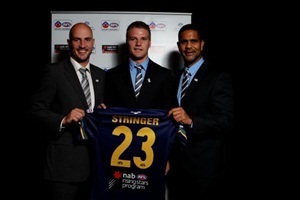 The Bendigo Pioneers star had suffered a badly broken leg which would sideline him for the AIS-AFL Academy tour of Europe and the remainder of the TAC Cup season.

A heartbreaking scenario for a 16-year-old who had the footy world at his feet.

To Stringer’s credit he didn’t let the disappointment linger and his dedication to ensure he did everything right in his rehabilitation has paid didvidends.

Stringer arrived home from Europe this week where he was one of the standout players for the AFL-AIS Academy.

The tour came 12 months later than Stringer expected, but it was worth the wait.

“Missing out last year really hurt, but thankfully everything has turned out well and I had a great trip,’’ Stringer said yesterday.

“My leg feels fine. No different to my good leg.”

The 13-day tour included three matches; a 31 point loss to Box Hill Hawks in the curtain raiser to the Richmond versus Carlton clash at the MCG, a convincing win over European Legion at Surrey Sports Park in London and another overwhelming win against European Titans at Chantilly Polo Club in Paris, France.

The Australian squad, involving 30 of the country’s best footballers at under-18 level, trained at the AIS European training base in Varese, Italy.