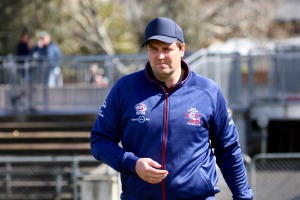 Gippsland Power coach Leigh Brown has been named the TAC Cup Coach of the Year at the annual TAC Cup awards night.

Brown is the first of Gippsland Power’s 12 head coaches over the clubs 25-year history to win the award.

In his fourth year as head coach Brown has been acknowledged by his peers for not just his brilliant football strategy and game sense, but his ability to develop players.

Coaching in a competition with a primary focus of development, the balance between winning and development can be tough to master. Brown has found that balance, never compromising a player’s development in the pursuit of winning, rather challenging and inspiring his players to be their best of which winning becomes a secondary outcome.

Power finished the 2017 home and away season with an eight win and ten loss record. Seventh overall Power have made the finals and go in with winning form.

Unlike the majority of his counterparts, Brown faces a number of different coaching challenges before his players even step out on the field to play.

The members of Power’s TAC Cup squad stretch from Buchan in East Gippsland to Waratah Bay in South Gippsland and Pakenham in West Gippsland. This distance severely impacts the ability of the complete squad to come together.

In stark contrast to other TAC Cup teams who can train together three times per week, Brown has just an hour and a half a week of contact time with his full squad.

Despite this Brown has forged a tight knit playing group that are committed to each other, their coaches and the greater club. Brown puts in an enormous amount of work behind the scenes to ensure his players are receiving all of the feedback and programs that they need to develop.

Through his own experience at AFL level as a premiership player and assistant coach, Brown drives an expectation of elite standards and has taken the high-performance culture at the club to the next level.

“Leigh really does go above and beyond” Francis said.

“The work that he puts into his preparation is second to none. What these boys get each week in terms of individualised video reviews and feedback is exceptional.

“He never stops thinking about how he can give each player on the list the best chance to be drafted, he is always coming into my office asking ‘what do you think about this’ and throwing different ideas around.

“It’s so pleasing to see him acknowledged for the work that he puts in and what he has achieved with this group this season.”

One of the trademarks Brown established at Power in season 2017 has been ‘family’, in that the players show care and respect for each other and the club as if they are one big family. It’s something that Francis can see having a positive impact across the club on a daily basis.

“The relationships that Leigh builds with his players, parents and our staff has created a really close and supportive professional environment.”

This year Brown’s coaching workload was not just focused on Power. With the AFL restructuring the elite pathways, Brown also took on an assistant coaching role with the Victoria Country Under 18 team that competed in the NAB AFL Under 18 National Championships. Recently he also worked with the Vic Country Under 17’s futures squad.

As the head coach at Power Brown also plays a pivotal role in assisting and developing the coaches and players of Power’s Under 15, 16, and girl’s teams. There is very little down time as once on competition is completed the planning and preparation for the next season begins.

Gippsland Power take on Geelong Falcons in an Elimination Final on Sunday 10th September in Ballarat.