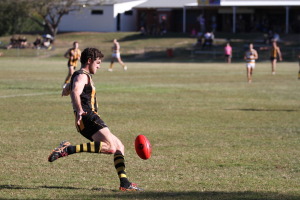 The Tigers struck back yesterday at the Den to record a comprehensive victory over a determined Aspley team. After experiencing only their second loss in two years last week, the Tigers were inspired to bounce back to the winner’s side of the ledger in this home clash at the Den.

The Hornets kicked the first goal of the game but the Tigers recorded the next seven to snuff out any likelihood of a true contest. Whilst the Aspley Hornets worked hard to stop the rampaging Mayne Tigers, the determination shown by the home team to put last week’s woes behind them meant there was little scope for stopping the relentless momentum. Jasper Craven lead the way in the first quarter with some clever work around the goals while the midfield lead by Shaun Daly meant the ball was in the Tiger’s offensive area for most of the quarter.

The lop sided affair continued into the second quarter with the Tigers kicking another six goals to one. Clinton Brunnenmeyer really hit his straps in the middle yesterday as he returns to the form expected of him after a long layoff from a work injury.

Once again the Tiger backline was very solid with safe work of Tom O’Malley and Bill Stephens complemented by the speed and attack of Spencer Greville while Dean Hartley ventured forward every now and then to take some cameo marks and kick two goals.

In another return to best form, Jack Collings was impressive as he added to the versatility available in the middle and around the ground.

After half time, the drive for a big score continued but to the huge credit of the Aspley boys, they did not give in with the last quarter being their best for the day.

Yesterday was the last home fixture for the Tigers with three rounds to complete. The next two games are on the road against Nambour and Caloundra with a bye scheduled for the last round of the year..