A Ton for Faulkner 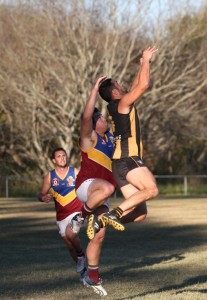 Luke Faulkner kicked his 7th goal in the time on period of the second quarter of the clash with the Caboolture Lions at Mott Street yesterday. It was sweet relief for Faulkner as the normally composed character was feeling the pressure of the prospect of achieving the second only 100 goal haul for a Mayne Tiger in 90 years as interest in the milestone had reached fever pitch during the week.

A pitch invasion by dozens of well wishers and supporters halted play in a scene not experienced at Mott Street capping off a tremendous achievement by a much loved Tiger.

The last time this milestone was achieved was way back in 1983 when Dale “Chook” Woodhall kicked 113 for the Tigers. Interestingly for the statisticians, Woodhall and Faulkner both wore number 4 in achieving the milestone.

Faulkner went on to kick a total of fourteen goals to equal his effort when these clubs last met.

Whilst the day belonged to Faulkner, and the score was very lop sided, plenty of credit goes to the Caboolture Lions who battled it out right to the end never giving in at any time.

Once again, credit must go to the Tiger defence that continues to be rock solid with Bill Stephens making the most of his opportunities to get into the action and maintain an enviable defensive record.

Club Captain Caleb Brown was back from a couple of week’s lay off to enjoy some time in the middle and up front which he clearly enjoyed racking up almost fourty possessions and some valuable time in the action.

The Tiger midfield was dominant and it is very clear that everyone is working at full capacity to keep their position in this side as the club approaches the finals. Corbin Sellen went to a new level yesterday as he drove himself to stoppages to get the hard ball and in the process kick five goals in an impressive performance.

Young Zac McLean continues to show he is a player that has a big future as he also achieved significant possessions including five goals from an on ball role.

Unsung midfielder Jake Magill played his usual composed role accumulating possessions as a link player delivering quality ball to a hungry and grateful forward line while it is getting harder to say anything more about the Coach Shaun Daly as he controls his young midfield group like a general.

Even though this was a comprehensive four quarter win, the Tiger faithful will be pleased that it was also an efficient effort with no hint of hubris attached. There are bigger things at stake as the club approaches the important part of the season.

Everyone will enjoy a weekend off with the competition bye next week and look forward to the Caloundra road trip following.