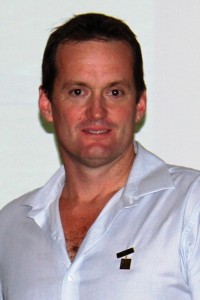 It has been some time since the Tigers awarded a life membership which underlines the price that is placed on this honour at Tigerland. At the recent Club Champion Award night this rare honour was bestowed on long serving senior coach Mitch Ferguson.

Ferguson, a Cairns product, first ventured to Brisbane in 1993 to study at the University of Queensland and in a fateful decision decided to join the Mayne Tigers. He debuted in the seniors in 1994 playing two seasons before returning to Cairns to teach in 1996.

After several years working in Cairns as a high school teacher he was lured back to Brisbane and at the same time resumed his footy career at the Tigers playing for three more seasons before sustaining a severe back injury which cut short his senior playing career in 2004. However, his love of footy and teaching combined to encourage him to take up a coaching position as understudy to Rob Dickfos as the reserve grade coach for seasons 2005 and 2006. Dickfos moved on after 2006 and Ferguson jumped at the opportunity to take the head coach position in 2007.

It has been a tough road for the Tigers over the intervening years but at the same time it has been one of slow renewal and much credit goes to Ferguson for his range of effort across the footy club’s core activities. Whilst there haven’t been any additions to the trophy cabinet, there has been a strong increase in the depth of the playing personnel as well as the way in which the club presents itself and works as a cohesive unit.

President Russell Ditchburn, who has also worked as one of the coaches under Ferguson was very pleased to be the one who presented this honour after having a very close relationship over the last seven seasons working together. Ditchburn gave an account of the many activities that Ferguson has undertaken for the Tigers over his time at the club in addition to his playing and coaching record. This included a committee position, marketing and finding sponsorships, fundraising, hosting club functions and working with the Mayne Juniors assisting junior coaches.

Ferguson’s impressive record includes six years at the helm, which is the third longest serving senior coach for this proud club. He had a short break in 2011 stepping down as Head coach but still worked with Luke Faulkner as bench coach before taking over again in 2012.

In his response to the award, Ferguson was truly taken aback by the announcement given that he is rarely out of the inner sanctum of the club to know all the goings on.