Training Kicks off for 2018 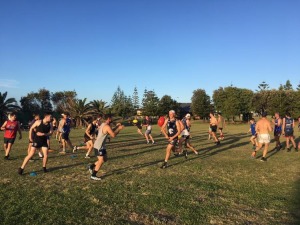 The Newcastle City Blues Australian Football Club  have begun the defence of their Premierships in both Senior Mens and Womens AFL on Tuesday 13th November at Bar Beach.

With No.1 oval out of action with cricket and the planned Supercars concert, the Club will base themselves out of Bar Beach pre-Christmas for the traditional “12 days of Christmas" summer training sessions.

2018 Premiership Coach Tim Cotter will be at the helm for the sessions “working on fitness, skills and fun being the main aim of training this time of year”.

“We have most, if not all players returning from the 2018 Black Diamond Cup team and some returning Blues making their way back to No.1 in 2019. City Juniors Harry Keast and Hugh Kelleher will be two excellent ‘recruits’ for the Club”.

“We welcome any new players to join us for training in the pre-season”.

Winning the final Black Diamond AFL competition titles in September 2018 was extremely satisfying for the Blues. With a number of hurdles to overcome in the past 2- years including a restriction on any new players to the Club in 2017, dropping of the third grade competition, home player cap and points system in 2018 for the mens sides and the splitting of two teams evenly into one competition in the Womens competition had its challenges for the Blues.

Newcastle City looks forward to the new AFL Hunter Central Coast competition kicking off in 2019 with the Senior and Junior competitions unified and additional professional resources and staff being provided to AFL in the region.

In other Club news, President Nathan Wilmott was awarded Life Membership for his 25 years of dedicated services to the Blues at the recent Club AGM.