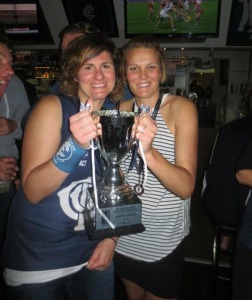 The Newcsatle City Stars have run the table after defeating the Nelson Bay Marlins in the Women's Grand Final at No. 1 with a convicing 10.11 71 to 1.6 12 win.

It was a hotly contested footy in the first quarter with City kicking three goals to one with captain Audrey Gillingham kicking the games first then league top scorer for 2017 Meaghan MacDonald kick a major along with Sarah Halvorsen giving the Stars a 10 point lead into the first break.

It was another hard fought quarter in the second with another 3 goals to City through Taylah Smith, Paige Mathewson and Ashlee Hayllar giving City a 41 points to 12 lead into the long break.

From there is was a clean pair of heels from the girls restricting the Marlins and cutting off any forward play from Nelson Bay keeping them scoreless in the second half. Tayla Braithwaite kick a goal in the third and as they stars turn for home they held a 40 point lead.

It was all City in the final quarter with goals to Sarah Halvorsen, Taylah Smith and Ashlee Hayllar to see City take the flag for the second time in the women's competition history. Well done girls, flying the flag in 2017.