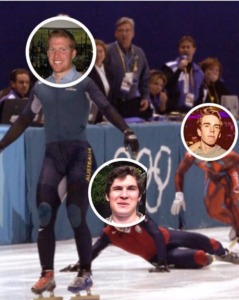 The women lead the way and showed the men how it was done with Erin White taking the title leading the race from start to finish. Ez held off a late bust from both Meaghan MacDonald and Steph Medcalf to win.

The men took to the track with Seeny setting a cracking pace for the first 250m then it was Jakey H's time to shine and boy did he take the limelight. With less than 50m to go Jake had opened up a 20m lead and was home and hose before he clutched defeat from the jaws of victory. He stumbled and went down. Picking himself back up he still held the lead but two and half steps later he was down again. Jackson Crawford being the great teammate that he is checked to see if Jake was ok which allowed Ian "Steven "Fiji" Bradbury" Baker, the Flying Fijian to take the title.

There is BarTV footage which we are all looking forward to making Jakey our 2016 "Almost legends" champion of Channel 9's AFL footy show off the back of Teaguey taking it out last season.