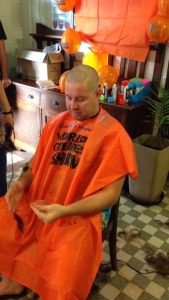 Led by Vice President Nathan Jones Newcsatle City has raised over $2000 for the Leukaemia Foundation as part of the World's Greatsest Shave held at our major sponsor the Commonwealth Hotel. A massive crowd of City faithful gathered so the event to see Jonesy shaved off his Santa CLause beard which he had grown for two years. Some would not know the beardless Jonesy so if you see an young kid walking around the club you haven't see before it is more than likely a junior player so please help them out with where to go.

Great job Jonesy on raising so much for such an amazing organisation. Thanks also to Stew and Cath for hosting the event. We also had some others get behind the cause Nathan Wilmott and Kailee Goodwin let the clips do a number on their hair as well. Well done to all those involved.