City AFL 9's to play on the SCG 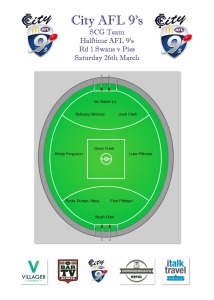 It is exciting to have the opportuntiy to play on the SCG in front of what will be a bumper crowd as the Swans take on the Pies in round 1 of the AFL. City AFL 9's have selected the following players to make their SCG Debut: