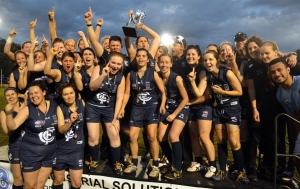 2015 started with the inaugural City AFL 9's Summer Competition with 8 team participating in the 8 week competition. The Pelican's took out the competition going undefeated beating the RAMS in the Grand Final.

One of the absolute standouts of 2015 was the introduction of the women's football and our Newcastle City Bluestars. The stars began the season with the Pre-season competition held at Warners Bay where the girls went on the win the day.

The boys traveled tup the Valley for the Muswellbrook invitation pre season day. Newcsatle City took out the day to start the year with some silverwear.

Into the season the girls went on the win all but two regular season games to end up second on the ladder. Into the semi-finals the girls won through to the Grand Final to take on a very good Nelson Bay side. The girls took the inargural BDAFL Women's title with a very good win on our home turf at No. 1 Sportsground.

All four teams played in the Grand Final in 2015 and the mens teams took the tile in First and Second division the week after the girls took the title.

Our Newcastle City Bluebirds Netball team once again had a very good season making the finals. They played in a very exciting game to go into the Grand FInal that ended in triple overtime and narrowing going down in the match. We are looking forward to another great year in 2016 for the Bluebirds.

In 2015 we set up our first Cricket team. The Newcastle City AFC team has two teams playing in the Newcastle C&S Cricket competition. This has been fantastic for the club with many new members along with sponsors joining City.

We would like to thank all our sponsors for the 2015 season, The Premier Hotel, Body Worx Physiotheraphy, Newcsatle Fire Extinguisher Services, Villager Property and Bliss Nails.

We look forward to a fantastic 2016 season ahead with City AFL 9's, the first, seconds and Women's teams defending their 2015 titles, new sponsors, new inititives and some exciting things coming to CIty in 2016.

Thank you to everyone for your part in the 2015 season.