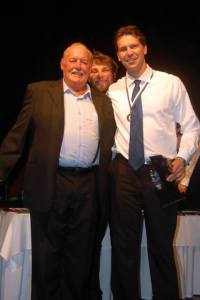 I met Al when he joined our great club in '75 or 6 (a long time ago). As a junior and backing up playing in the Reserves as well, I remember this big bloke with with plenty of hair, a big booming roar and a bloody big motor. Al might not of looked or moved like much of a footballer, he may not have had a great deal of skill, but I am proud to say I played football with "Big Al Gleeson". We can go through life and meet thousands of people throughout the journey but people like Al stand out. I was one of those mentioned in the tribute on the club's website by Stumpy, and can support the fact that Al did look after us.... both on and off the field...."after all someone had to teach us how to drink!". Our footy club is blessed with characters both old and young and certainly in between, sadly, Al's passing has robbed us of yet another one. Newcastle City is a better club for having Al's support on and off the field, and it's people like the big fella that reinforce why we are the envy of all other footy clubs in the league. They're not just envious of what we have in the trophy cabinet, but of what we have around the ground as well, and Al was a big part of that. I for one will miss the big fella's presence at home games and other Blues Brothers gatherings, but I have no doubt he will never be forgotten. "R.I.P. my big mate". You deserve it!

Thanks for the memories!!!!