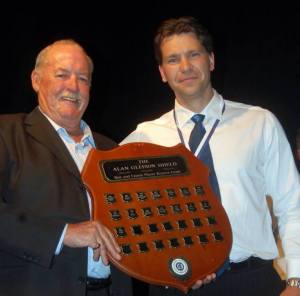 Big Al was larger than life itself. He was a fantastic mentor for a great many people, not just in the footy club but a range of people across Industry and Unions in Newcastle. With regards to Newcastle City, I met Al when I was a little 14 year old when starting to play in the Ressies after Under 17’s. Al was the ‘Man Mountain’ who took each and every one of us under his wing – literally. He was our enforcer, our protector, our mentor, our leader and our mate. Blokes like Steve Dwarte, David ‘Bruno’ Slavin, John Jannisen, Ian McCurley, Bruce Smith, Tony Bailey, David Mitchell, myself, Graham 'Bones’ Downing, Mick Vercoe, Peter Rowe, Jude Neighbour, Wayne Everson, David Herring and heaps more young Blues were always comforted by the knowledge the ‘Big Al had our back’.

Off the field, Big Al also led the way at a time when on field ultimate success was starved but off field ‘building for the future’ was underway. He literally held the club together through the 80’s, encouraging all the young Blues to work hard for the footy club – on and off the field. As President for several years, he amassed some fantastic people that still to this day are involved in the Club and owe Big Al a huge amount of gratitude.

He was deservingly bestowed with Life Membership over 30 years ago as fitting recognition of his significant contribution to our Club. The Reserve Grade Best & Fairest Shield is named in his honour. His presence is felt everywhere on our Club. His values are mirrored in City’s manifesto -  Loyalty, Resilience, Compassion and Mateship. No accident that this is what Newcastle City is built on.

To quote a fellow Blues Brother this morning “ Big Al – a man’s man and City through and through. He smoked sh*t loads, drank more and bled Navy Blue. He’ll be sadly missed but his legend will live on”

Big Al is survived by his beautiful and caring wife Cheryl, daughter Tanya and 4 cherished grandchildren.

A truly sad day for all.