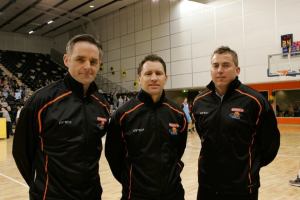 ACT referee Drew Meads has been recognised by the newly independent National Basketball League (NBL) with his addition to the league's panel of working officials for the remainder of the 2013/14 season.

An existing Level One official and a regular part of Basketball Australia's WNBL roster, Meads, at just 34, has attracted the attention of the most prestigious league in the country despite the fact that Canberra no longer has a team at that level of men's competition.

Whilst the honour is a fitting reward for an official who is a regular presence in the local Premier League competitions and possesses the requisite personal skills to manage the highest senior levels, it's also a significant boost for the local officiating programs.

Basketball ACT Referee's Manager Karin Berrysmith was naturally pleased for Meads and the new opportunity he will receive, but was quick to recognise the value the appointment can provide for even younger officials.

“Drew is certainly a great fit for the NBL but most importantly it's an example of just what's possible for youngsters choosing to pursue an officiating pathway here in the ACT,” she said.

Meads began his officiating journey at just 10 years of age and after seven years of development took a break, before taking it up again in 2004. He quickly progressed via National Junior events onto the WNBL panel and expects to commence his new role over the next few weeks as the NBL enters the hugely crowded Christmas period.

Get a better bed