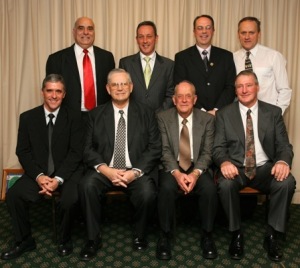 On July 8th, 2006 the North Brunswick Football Club celebrated it's 40th Anniversary with a Green and Gold Ball held at the Moonee Valley Racecourse in the Celebrity Room.

Over 200 past & present players, officials, family members and supporters attended the event which was held to honour those that have served the club with distinction since it's inception in 1966.

As soon as guests started to arrive at the function the feeling around the room, which was decorated with premiership flags and green and gold paraphanalia was that it was going to be a night to remember.

Present player and 1996-2005 Team of the decade inductee Jeremy Freeman was the Master of Ceremonies for the evening and did an outstanding job throughout.

After the welcoming speech from current President Sof Tsialtas who thanked all those in attendance and all that have contributed in some way to our wonderful club it was time to announce the 1966-1975 Team of the Decade. Club Legend Rob Jewson was called upon to hand out the awards to those who were selected in the team.