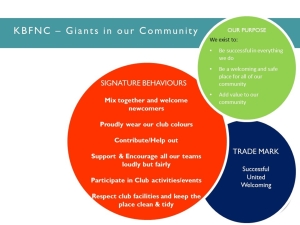 In 2001 the Korumburra and Bena Football clubs merged to form the Korumburra Bena Bulldogs and wore the AFL Western Bulldogs jumper from 2001 to 2014. Jumper clashes in the Alberton FL and rumours the club may be moving to a new league prompted the club to make the change and now the Korumburra Bena Giants proudly wear Greater Western Sydney Giants colours of Grey and Orange.

From 2001 to 2016 the Giants played in the Alberton Football League and following  the 2015/16 Senior Football Review by AFL Gippsland joined the newly formed West Gippsland Football Competition.

Although still young as a club the Giants have a very proud History amassing 16 football and 24 netball premierships in its16 years.

KBFNC has been working hard to create a Successful, United and Welcoming club!  Through working together with 'Culture Squared’ our Senior Football & Netball players along with our members have defined our Purpose, Signature Behaviors & Trade Mark and we encourage all our members and guests to buy into being 'Giants in our Community'.