The concept of a Taylors Lakes Football Club came to fruition during 1989 with discussions taking place between members of the Taylors Lakes Recreation Club and other local identities. In 1990 the club fielded an Under 10 and Under 12 team in what was then the OPJSFL, soon to amalgamate with the EDFL. The teams, with great assistance from our first major sponsors, John and Sandra Zystra, (who contributed much to many of the teams to follow), played their first games at Pascoe Vale in front of many a watchful eye. During that same year a submission was made to the Essendon District Football League to allow us to field Under 14s in season 1991.

The league was at first apprehensive. A policy existed requiring clubs to field teams in every grade of the competition. The league finally decided to affiliate Taylors Lakes under a new “Growth Policy”, requiring us to enter higher grade teams every second year in age group order. However, the club grew exponentially and by 1993 was fielding teams in every age group including the Seniors B Division. Since that time the club has continued to grow and until 2004 fielded second teams in each age group from Under 10s to Under 14s. 2005 saw the entry of a second Under 16 team.

In 2010, the club celebrated its 20th Anniversary year in spectacular style with both Senior teams playing Pascoe Vale in the Grand Final in front of packed grand stands at Windy Hill. The Reserves went down in their first loss for the season and the Seniors WON the EDFL B Grade Premiership over much fancied Pascoe Vale with a very healthy final margin. It was an excellent result from a team made up of high percentage of home grown Taylors Lakes players, many of whom have played all or most of their Junior football with the Club since Under 10′s.

In 2015, we celebrated our 25 year anniversary in style with our champion Reserve team winning back to back Premierships for the first time in club history. Our Under 12 team also won the Premiership making it a fantastic anniversary for the club with many more victories to come.

Here is a copy of our weekly newsletter called ‘News from the Lions Den’ from August 2002. The newsletter was very popular with players, parents, supporters and members. It was started by John Rumbelow who did a great job, initially for juniors, but it became a club favourite. It was then taken over by Dennis and Julie Ferns. 275 copies were printed every Thursday night and the members jumped on them like a seagull on a chip. Amazing detail was provided with every team’s weekly results, goal kickers, ladders, every club player/number, player profiles, sponsors, Bay 13 and social events.  Many hours each went into the production of this newsletter. It was pre the Internet revolution, the newsletter was the glue that stuck the club together. The Newsletter ceased in about 2005 when printing became too difficult.

Please click on the links below to read the newsletter.

2002 was the year that we tragically lost an U18 Player, #27 John Guglielmino to Meningococcal disease. John died in just 48hrs. John was a very popular club person and a goal kicker. He was leading the competition with 67 goals.  The club supported the family as much as we could. Every player formed a guard of honour in their jumpers at his funeral.

This U18 side was coached by Glen Potter, Lloyd Ingram was Team Manager, Trent Nicholson was Captain and Ricky Potter was runner. The boys met at Keilor’s Ground the night before the game and sat in the centre circle in the dark to commit to each other. The team ran through the banner at Keilor that read “27 reasons to win..” (Johnny’s number). 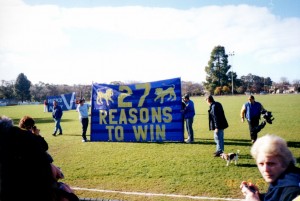 They went on to win this very emotional premiership by 10 goals. Our first ever U18 flag. The whole team played an amazing game. Chris Ragusa was best on ground, Mark De Sousa and Brendan Jones qualified to come back to the 18s after playing a lot of the year in the senior side. The opposition coach said after the game that the Lakers would have beaten Collingwood that day. There were 9 emergencies that missed out on playing in the game. 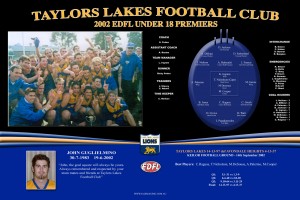 The story below, The Lakers Dream, was written by John Guglielmino as a year 12 school essay the same year he passed away.  It was given to the club by John’s school teacher. 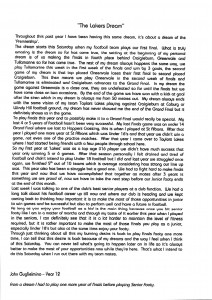 Our U18 team, to this day, celebrate every win by singing the club song in the Goal Square in honour of John and we uphold the John Guglielmino U18 Goal Kicking Award and tradition each year. 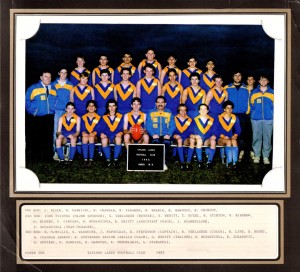 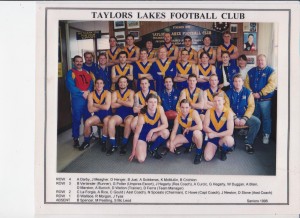 Sung to theme music of ABC radio show “Australia All Over”

I'm sorry, but I can't find any Ladder for this Competition yet.
If you believe the Ladder should be here then we suggest you contact your Association by using the link below.