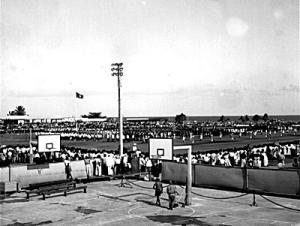 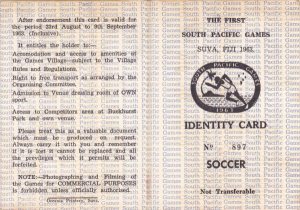 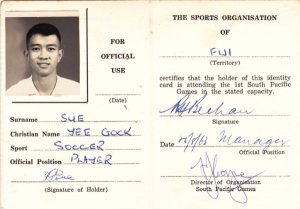 A tennis ball served by Mrs. Nono Tani of the Cook Islands at 9am on August 29, 1963 marked the beginning of the South Pacific Games. The ball was served on a perfect day with the sun on show. Prior to this, rain in Suva had cast doubt on the Games. In the end the weather decided to cooperate and joined hands with the larger Pacific community in a celebration of the regional sporting showpiece. Almost 700 competitors from thirteen Pacific islands took part in the ten sports that constituted the first games.

Under the leadership of Mr. J. H Common as chairman, the organizing committee had preparations well underway in 1962 for the first South Pacific Games in Suva in 1963. Facilities at Buckhurst Park, the main venue were upgraded with a new concrete stand, an embankment with improvements to the grounds and associated amenities. Organizers sought out regional expertise in organizing the game and used the 1962 Empire Games in Perth, Australia as a model for their smaller scale regional version.

The lack of finance and expertise caused concern in the lead-up to the games. There were fears that the first games would not be properly organized. The lack of coordination of national sporting bodies and problems in communication created major problems for the organizing committee in the early phase of preparations.

The voluntary nature of the organizing committee saw them face problems of time and commitment. By late 1962 it was decided that the games needed a full-time Director of Organization. Mr. Francis Joseph Coyne, an Englishman, with Olympic and Commonwealth games experience was appointed to the position in early 1963. He was assisted by volunteers like Mr. K.C Gajadhar as secretary of the organizing committee. Mr. Gajadhar had gained experience in large-scale sports organizing as manager of the Fiji weightlifting team to the Perth Games. His calls for more public involvement saw fund-raising efforts by various community and social groups in Fiji to help meet part of the costs of the games.

The South Pacific Commission and the Fiji Government were the main financial backers for the first games. By April 1963 the final list of sports and competing countries was taking shape. Colonial officials in most of the countries played their role in the administration of sports and in participating in the various committees.

Teams like Fiji and New Caledonia were expected to set the benchmark at the inaugural games. The two sporting giants from the Pacific had more previous international and regional competition that the other countries. Fiji had regularly competed at the Empire Games and at the Olympics with some of their athletes putting in creditable performances at this level. Athletes like Sitiveni Moceidreke, Rev. Viliame Liga and Mesulame Rakuro had an imposing record at that level in comparison to other regional contestants. New Caledonia and French Polynesia with their French connections were the other island nations to have had more than their share of internationally seasoned competitors.

The first South Pacific Games showed the true spirit of competition in a uniquely Pacific Way. Organizational and logistical difficulties were met with a smile and a belief that things would eventually work out. At the same time the foundations for regional and national sporting bodies were laid down. The role of professional administrators and structured sports development was also given greater prominence. Local sports administrators under the leadership of expatriate experts like Coyne and others saw the need to ensure their sporting future by investing in facilities, training programs and incentives for their sportspeople. The dominance of Fiji at the first games saw a shift in regional thinking of ways to ensure that national sporting pride was kept at future games. New Caledonia and French Polynesia, in particular, attracted additional sports funding from the French Government to ensure French pride in the region was not slighted.

This first attempt at sporting competition in the regional setting showed a genuine spirit of adventure and enthusiasm among the competitors, officials and spectators. Teams made allowances for lateness of their opponents or other technical rulings that would lead to victory. Tonga, for example, were awarded the bronze medal for table tennis when their Gilbert and Ellis Island opponents did not turn up for their match. Tonga offered to play the GEIS and in the ensuing match lost their bronze medal. The GEIS did not have women for their lawn tennis team and "borrowed" local women to make up the numbers.

Ten sporting disciplines were incuded in the Program:

Fiji had the most competitors, participated in the most sports and dominated the final medal tally. Fiji held the upper hand in both men's and women's swimming. Carl Bay won the most number of individual medals at the games with five gold in swimming in distances from 110 yards to 1,650 yards. The Fiji women swimmers won all the gold medals on offer. Fiji shared the honors with PNG in the men's athletics. Fiji led by Ana Ramacake in the sprints and jumps and Mere Turukawa in the field events dominated the women's section. With their fair share of medals in boxing and team sports like rugby, tennis, soccer, basketball and volleyball Fiji ended the first games on the high in which they had started as hosts.

For all the results of the Port Moresby 2015 Pacific Games

Organisation of Sports Federations of Oceania

Signatory to the Brighton Declaration on Women and Sport