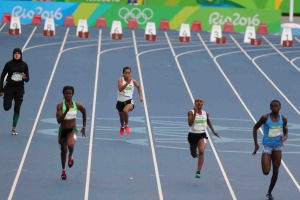 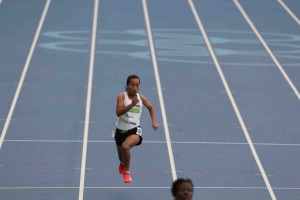 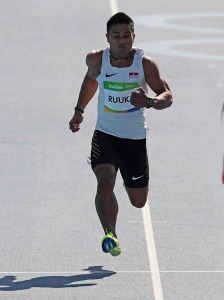 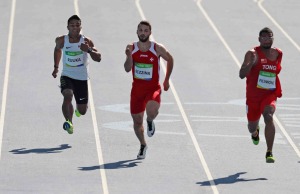 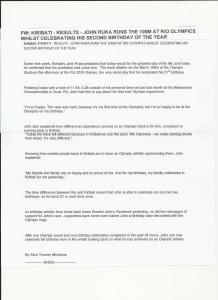 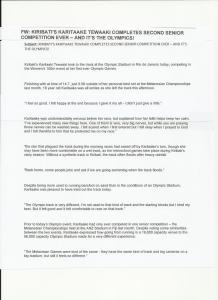 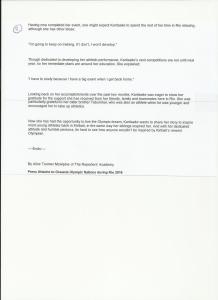 Karitaake and John did their best.

The Kiribati NOC team to the 2016 Olympic Games in Rio again had three competitors.   As before, the weight-lifter (David Katoatau) was entered as the result of a TEAM qualifying tournament.   By contrast, the two track athletes simply had to be "best male and best female" in the country.   In consequence the two athletes were involved (as are all non-qualified athletes) in "Preliminary" rounds, from which the best proceed to the Heats of their event.

It is true to say that both Karitaake Tewaaki (age 18) and John Ruuka (age 20) did their best in their respective races in Rio, in terms of attitude and effort.   However, earlier this year, in the Melanesian Championships 100m. in Suva, Fiji, both ran considerably faster.   So one has to ask how much were both of them affected by the stadium and the occasion in Rio ?

In Rio, the two sprinters wore white tops and black shorts.   Many years ago, when Kiribati began sending multi-sport teams overseas, a decision was made (2003) to use the main colours of the national flag, i.e. blue for the Pacific Ocean and red for the equatorial sun, as the Kiribati team colours.   It is debatable as to whether this change was a calculated decision, since a reflection of the flag would seem to be more distinctive than a simple black and white combination.   It was later learned that this colour scheme was that offered by the main sponsors (Nike) because no alternative (blue and red) had been requested by KNOC.

Comments from the athletes.

When interviewed, following their races, by the "Reporters' Academy", both athletes mentioned their lack of practice off starting blocks plus the poor state (often flooded and made of sand) of the only 400m. track on capital island Tarawa, i.e. Bairiki Stadium.   It is ironic that the headquarters of the Kiribati NOC has an address at that stadium !   Surely some work on that stadium track would always be beneficial to the athletes in their preparations ?  Also more regular use of proper equipment - which exists on the island - should make it less of "a different experience" when athletes have to travel to competitions overseas.

Also Reports on each athlete following their "Reporters' Academy" interviews.