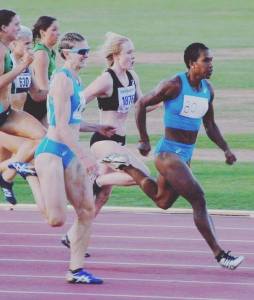 Toea Wisil beat  the current Australian 100m champion and national record holder Melissa Breen on her home ground in Canberra at the ACT Championships last weekend. On her way to completing the sprint double at the ACT Championships , Wisil set a new national record of 23.23 secs in the 200m heats and equalled her personal best of 11.29 seconds in the 100m, edging out Breen who ran 11.33.  Breen is said to be a little behind where she normally is at this stage of the season, following some hamstring concerns but was very happy with her races at the weekend. “With the Australian Championships only five weeks away these two athletes are expected to push each other ,which will be good for Toea’s aim to qualify for the World Championships and secure invitations to high level meets overseas” said APNG President Tony Green. Wisil is expected to face 2012 Olympic 100m hurdles Champion and ex training partner Sally Pearson this Saturday in the 100m sprint at the Queensland Championships, and is likely to race Breen again in Canberra on March 11.