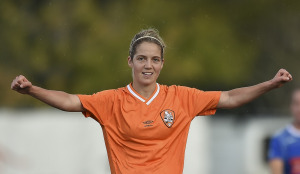 Signing for Roar marks a return to Westfield W-League level for both Marzano and Blackburn, while defender O’Brien and forward Persson will step-up for the first time.

Versatile midfielder Blackburn, who spent time with both Roar and Adelaide United before returning to star for The Gap Women, believes the young squad is ready for the challenge.

“It’s been a long time (since being with Roar). It’s great adjusting to the new team and getting the cobwebs out,” she said.

“All the girls are really excited. We’re training really hard and we’re at the point now where we’re coming to the top of our cycle so hopefully we will be peaking right in time for the season to start.”

Alongside Gators teammates Marzano and O’Brien, Blackburn enters the new national season full of form and fitness having already claimed two trophies in 2015.

“The standard has jumped since last year, I think it’s a lot tighter competition,” Blackburn said.

“You saw out there, a lot of girls have been trialling with Roar and have been in contention for spots at the Roar. It’s been good.”

Sunshine Coast’s Persson forced her way into Belinda Wilson’s squad with 24 goals in Fire’s run to the third week of the Finals Series.

The Swedish striker said training with Roar in recent months has made for a smooth transition.

“I feel like it’s giving me a lot, playing with such high-level players around me,” Persson said.

Persson agreed with Blackburn’s assessment of PlayStation 4 NPL Queensland as an ideal stepping stone, adding: “There is good quality in the NPL. It’s been a great season preparing.”

Westfield Matildas stars Clare Polkinghorne, Katrina Gorry and Tameka Butt have all also been confirmed as returning for the new season.

Roar commence their tilt for a third championship against Canberra United at Suncorp Stadium on Sunday, 18 October.