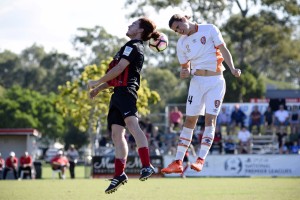 Brisbane Roar FC have secured a much needed 3-0 win over Redlands United at Cleveland Showgrounds on Sunday night.

Roar dominated from the outset, with two quick goals to Nathan Yoon and Finn Beakhurst pushing the visitors to a comfortable lead over Redlands.

Despite a flurry of chances in the second half, Redlands were unable to convert, and Rahmat Akbari's strike put the game beyond doubt.

11' - GOAL FOR ROAR - Nathan Yoon fakes a shot in the box, drawing out Denver Crickmore for the save, but dribbles past him.

20' - GOAL FOR ROAR - Finn Beakhurst receives a through ball for a one-on-one with Crickmore and slots it home, just out of Crickmore's reach.

38' - CHANCE FOR REDLANDS - Sam Roper's shot is just over the crossbar after some excellent passing from his teammates.

52' - GOAL FOR ROAR - Rahmat Akbari is played the ball and again Crickmore comes out to block the shot but Akbari works his way around.

66' - CHANCE FOR REDLANDS - Jake Sherwood works the ball up the field before switching it to Alexander Warrilow, then back to Sherwood who puts a cross in for Feli Sheriff but his shot is off the mark.