ROUND 1 PLAYER OF THE WEEK 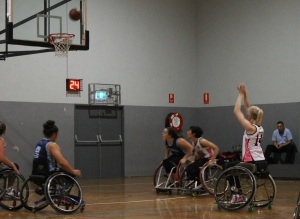 One of the most potent scorers the WNWBL has ever seen, Amber Merritt was at her best through the opening weekend of season 2018, helping the Be Active Western Stars advance undefeated through Round 1.

Merritt averaged 29.5 points, 9.3 rebounds and 5.3 assists across four games while shooting 55% from the field to score more than seven points per contest than the next highest player.

She started the season in fine form, recording 34 points to almost out-score Sydney Uni by herself on Friday night as the Stars doubled up their opposition on the scoreboard.

Collecting nine points in the opening term, Merritt got off to a hot start but she finished the game with 11 points in the final term before subbing out with four minutes still left on the clock.

The following afternoon, she added another 30 points on 50% shooting in 31-point a win over the Comets.

She also recorded eight rebounds and an equal game-high five steals that helped the Stars own a 24-8 advantage in points off turnovers.

The side had a quick turnaround on Saturday, hitting the court again that night against the defending Champions but Merritt showed no signs of fatigue.

She tallied a triple-double while notching game-high’s in points (34), rebounds (17) and assists (11) as she equalled the Blues on the scoreboard while shooting 15-25 from the field and 4-4 from the free-throw line.

On Sunday, the Stars won every quarter on their way to a fourth straight victory and while Merritt struggled with foul trouble, she still finished the game with 20 points, seven boards, four assists and three steals.

In 28 minutes of court time, she hit 9-14 from the field for her most efficient performance and if the Glider can maintain that stroke throughout this season, she will be able to lead the Stars deep into the finals this season.