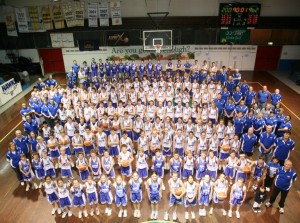 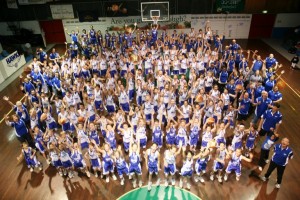 The Perry Lakes Hawks will soon say goodbye to the stadium that has been their home since the club’s establishment. The stadium, WA’s premier basketball facility, will be replaced by the new State Basketball Centre on adjacent land, scheduled for completion later this year. With generations of families that have walked its halls, filled its benches and played on its courts, some of the Hawks’ long-standing associates share their historic knowledge and fond memories as Perry Lakes Basketball Stadium prepares to close its doors for the last time.

Perry Lakes Stadium was built in 1962 for the National Men’s Basketball Championships and has been WA’s home of basketball for the last forty seven years. At the time of construction the stadium featured three courts and had no second stand facing Court 1. Courts 2 and 3 had bitumen surfaces and ran parallel to the other courts and the main entrance was located near, what is now, the first aid room. Later Courts 4 and 5 were added, followed by the corridor along with Courts 6, 7 and 8.

Graham Luck, a former club President, first visited the stadium in 1970 to compete in the national Intervarsity Basketball Carnival, before relocating to Perth the following year. He was initially involved with City Beach Basketball Club as a player, and then as coach, referee and administrator.

In the mid 1970s, the WA Basketball Council announced an ‘elite’ competition held on Friday nights, featuring eight teams from the prominent districts of Perth, Swan Districts, Tangney/Willetton, Subiaco, East Perth, Cockburn, Stirling and Claremont. At the time, Graham recalls that the strongest clubs in the Claremont district were Scarborough, City Beach and Claremont, and after some dissension and debate, a new club was formed as “Scarborough City Hawks”.

Mike Bussell, current Hawks Juniors Director and Perry Lakes Stadium Manager for Basketball WA, played basketball here for several years in the late 1960s, and returned to the stadium in 1978 when his and wife Del’s children joined as juniors with City Beach Basketball Club. Mike joined the Scarborough City committee in 1983, before becoming the Director of Junior Competition in 1985 (a position he still holds 24 years later).

In 1986 the Scarborough City Hawks changed their constitution to rename the club the Perry Lakes Hawks. The new name was more geographically relevant and aligned the club with their home stadium. 1989 saw the formation of the State Basketball and WA Basketball Leagues from the previous District and Junior Competition.

1994 was a significantly memorable year for many, including former President Jim Dagostino as Hawks brought home their first SBL championship. The team defeated Swan Districts with an unexpected win, in what was anticipated to be a hard match. Jim coached teams from the Scarborough City days through to the later Perry Lakes Hawks teams. Jim’s son, Dion, is a current Board Director and the MSBL Coach.

Former Hawks coach John Gardiner coached over 550 games in the SBL. John, who started coaching with the club in 1982, coached the senior men since the inception of the SBL competition until the conclusion of the 2008 season when he retired. During this time, John describes one of his most enduring memories is seeing the many Hawks players go on to the next level of the sport, be it national or international, and says it is fair to say that the Hawks club has produced more players than any other in WA to do this. Some of John’s most notable achievements as a coach include winning the first championship in 1994, and then putting together four successive titles from 2001 – 2004, making the Hawks men one of the most successful programs in the history of the SBL. After years of involvement with the club and stadium, John says it is Court 1 that will be missed the most when Perry Lakes Stadium makes way for the new facility.

“The move to a new facility will be challenging and although a state-of-the-art facility, there will never be a better playing surface than that of Court 1 at Perry Lakes,” John said.

Rick Morcom, who was the WSBL Hawks coach for 16 years, would agree, describing Court 1 as the best court to play on in the entire league. During his time as a coach, the LadyHawks were never out of the finals, played in ten grand finals and took home six championships. The 1998 Grand Final was the most memorable for Rick, as it was the LadyHawks first championship win and the start of a seven-year streak of grand final play-offs for the team. Whilst the courts will be missed, Rick says it is the people that have really made the stadium the community that it is, and that’s what will be missed most.

Many who have been involved with the club, have also noted the community spirit that surrounds the stadium and how remarkable it is to have watched the generations that have passed through.

Mike Bussell, who has managed Perry Lakes Stadium since 1996, says one of the most enjoyable and special aspects of his time at the stadium has been seeing people’s children come through the stadium and then years later, their grandchildren. Mike and his wife Del (who passed away in March 2006), enjoyed their involvement in both the junior and senior competitions. Mike has notably enjoyed his continued association after Del’s passing, as he describes Perry Lakes as a second home and a second family.

Graham Luck also attributes much to the stadium and the community within for its influence over the years. “I am a great believer in team sport and that a coach can influence more than a junior’s basketball skills.  It is certain that the team spirit and camaraderie at the stadium has been a big factor in Perry Lakes’ ‘basketball children’ growing up to be responsible adults,” said Graham.

Steve Butler, who has run the kiosk at Perry Lakes Stadium for twelve years, is amongst those who have watched the generations pass through the stadium doors. “It’s good seeing the kids grow up and come play as adults. They come in and can’t even see over the counter, then years later they’re down here with their own kids.”

For the long-time ladies of the SBL score bench, Margaret Wright, Sharon Spinner, Tania Trengove, Marion Keighley, Peta Gardiner and Mardy Perret, the stadium will be greatly missed.  Marion started assisting with the score bench in the early eighties when her son was playing at the stadium and was recruited by Phil Anderson and Sandy Taylor. Phil also convinced Margaret to become involved in 1982 and she still sits on that bench 27 years later. In 1983 Marion asked Sharon, who also referees and whose children have played for Hawks, to join the score bench. Peta will fondly remember her time at the stadium, but will not miss the freezing winters and heated summers. The ladies agree with Margaret when saying the stadium has always been a safe place for children and the atmosphere will be hard to replace.

Past Hawks stars Peter and Melissa Sinfield both agree that Court 1 will be missed as a great court to play on, with Melissa describing it as “by far and away the best court in the country”.  Peter started playing with Hawks in 1995 and was part of the team that won four consecutive championships from 2001-2004. Melissa, who played for the Perth Breakers (now known as the Lynx) started with Hawks in 1996 and notes her most memorable moments as the SBL championships they won in 2001, 2002, 2003 and 2007.

The Tupaea family have been involved with the club for many years, and “Mr T” is a well-known supporter amongst the Hawks community. Mr T, the father of the current Hawks SBL captain Joe-Alan Tupaea can be found at almost every SBL game, and recalls the introduction of the finals drums. It was in Bunbury, 2001, that Mr T first introduced the drums to the arena, using the instrument to support the Hawks in a way that didn’t seem to be as appreciated by the opposition. After noise complaints, the referees instructed Mr T to cut the drums, but not one to be discouraged, he moved right over to the opposition’s den and started up again. “I sat alone, but we won that night,” Mr T recalled.

And so what may seem to outsiders as a somewhat ramshackle stadium is, on the contrary, a lively place full of passion and commitment to the sport. Many of the Hawk’s past and present players, coaches, managers, referees and the valuable administrative staff that make the stadium tick, will be farewelling more than just a building, they will be saying goodbye to the many memories built around the supportive community that lie within it.

In early 2010 the Perry Lakes Hawks will move across the road to their new home in the State Basketball Centre. The aspirations and competitive spirit of a new generation of Hawks will create new traditions and continue the Club’s history of success.