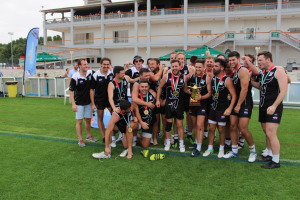 Thanks to Wesley Hull from World Footy News for the article.

Since joining the league for the 2014/15 season, the Bulls have not missed playing in a grand final, including reaching the big dance in their first season.. However, until today their only silverware was multiple pre-season cup trophies.

But after an excellent season which saw just one defeat – by three points – the Bulls knew this was their best chance, and they took it.
The Bulls kicked the first goal through Jack Egan before Daniel Gribbin snared one back for the Dragons. Nathan Holly, Vince Lyster and again Jack Egan slammed home goals for the Bulls as they got out to a 17-point lead. Fortunes seesawed after that, and the Bulls went to the first break with a two goal lead.

The Dragons were expected to come back hard in the second quarter and when Gribbin kicked his second, the Dragons were back with a goal. A snapped goal to Jordan Pollard (Bulls) was answered by another Dragons goal to Lachlan De Morton. Again a goal separated the teams headed towards half time.

Jack Egan’s third for the Bulls was then followed by majors to Joseph Yodgee and a second to Pollard as the Bulls changed the tempo of the game and pushed out to a 23 point lead. A lucky, late goal off the shin to Thomas Saunders gave the Dragons heart as the teams went to the main break with the Bulls three goals up.

The premiership quarter lived up to its name as the Bulls took control. A Tristan Johns goal saw the Dragons edge closer, but then the Bulls lifted with goals to Egan and Pollard. Another goal to Saunders for the Dragons was answered by Bulls’ goals to Tim Leoncelli and Will Cook for a huge 28 point lead at the final change.

The Bulls then put the game to bed with consecutive goals to Alex MacQueen and Ted Stobart to open up a 40-point lead. The Dragons kept fighting with goals to Gribbin and Travis Hayward. But a final goal to the Bulls for Pollard saw the Bulls safely home by 34 points and premiership winners.

Celebrations will be loud and long as the Bulls come to the realisation that a flag is finally theirs. They deserve their moments in the sun, and many moments at the bar.

The Dragons will be gracious in defeat, and likely admiring the Bulls’ tenacity to keep fighting year after year until they won.

Now the clubs will enjoy their off-seasons and the planning for the 2019/20 season will begin.