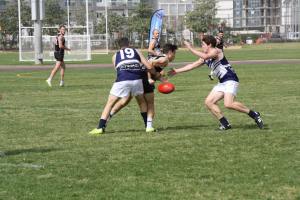 Thanks to Wesley Hull from World Footy News for the below article.

The dust has barely settled on the fourth round of the AFL Middle East season and already the two grand finalists are as good as confirmed again. The Dubai Dragons and Multiplex Bulls will meet each other again, barring an unforeseeable event of monolithic proportions.

The gulf between the top two and bottom two teams has expanded even further. It isn’t as wide as the Great Rift Valley, but it is worryingly enormous.

The Dragons and Bulls enjoyed huge wins at the expense of the Dingoes and Falcons, and in so doing have created a two game buffer between second and third place with two games to play. The Dragons cannot miss the grand final, still undefeated after four rounds. The Falcons cannot get there unless they win the preliminary final – winless after four rounds. The only mathematical change is for the Dingoes to defeat the Bulls in the final round by about 28 goals and win next round over the Falcons. Half of that equation is possible.
The Bulls were challenged to half time by the Falcons, leading by 22 points but unable to shake their opponents off. But a massive second half saw the Bulls kick thirteen goals to three, including a powerful eight goal to one final term, to run away to an 84-point win.

If anything, the carnage was worse in the Dragons v Dingoes match. Barely holding their place in the game at half-time, the Dingoes trailed by 33 points – not insurmountable, but against top opposition an almost forlorn hope. To prove that, the Dragons unleashed a rampage in the second half – kicking fourteen goals to one after the main break.

In the end they won by 108 points, inflicting not just a loss on the Dingoes, but a massive hit to the Dingoes percentage, hence the increased pressure of a grand final berth via the Preliminary Final.

What is significant now is the Round 5 clash between the Dragons and the Bulls. To be near certain of a grand final berth almost two months from the date provides a great chance to prepare, and the best way is to set the bar high and achieve. The winner of the next round clash will take a huge psychological advantage to the grand final, and this is where the Bulls need to win and grab that initiative to replace the doubts created by losing their past four grand finals to the Dragons.

To a lesser extent, the other match is important also. The Dingoes hold onto the best hope of challenging for the grand final by reaching the penultimate final. The Falcons do not want the wooden spoon - a win could see them grab third place and finals action. Both will be desperate for this win and this game will define each club’s seasons. Already, the Falcons hold an advantage being at home for the match.

It promises to be another big round of footy in the Middle East.