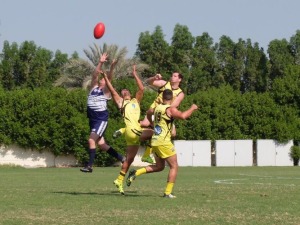 The new AFL Middle East season gets underway on Friday morning (Dubai Time) with a double header at Dubai’s Sevens Stadium. The season starts with the Dubai Dingoes clashing with the Abu Dhabi Falcons ahead of the grand final replay between the Dubai Dragons and Multiplex Bulls.

Whilst the off-season didn’t produce another team for the 2018/19 season – the Bahrain Suns, Doha Kangaroos and Muscat Magpies still a distance away from re-entering the competition – the four teams that take the field on Friday will be determined to create an exciting contest for this season’s flag.

Each team has seen the usual comings and goings which will change the look of team lists, but a look at last season also gives a clue.

The Dubai Dragons will again start favourite as they embark on a campaign that could net them a fifth straight AFL Middle East flag. Each year, the Dragons return to the field with enough replacements to cover losses. It remains to be seen whether they can again this season, but word out of the Dragons’ camp is that they are pleased with their renovated list. That is a worrying idea for other teams.

The Multiplex Bulls won the pre-season cup. They have won pre-season hit-outs before, right from their beginning. They have beaten the Dragons before, and will again. But the question remains as to how mentally tough they are in the biggest games – grand finals. Their list has been tweaked over the off-season and outwardly they believe they are ready to finally win a flag. Maybe their round one clash will give an indication, but grand final day is the proof.

Abu Dhabi were the big improvers last season. Ladder positions in a four-team competition tell little. But their results across the season showed a team that could win matches and were tough to beat. Over the previous off-season, the Falcons quietly built and everyone saw the results. If they have built further this past off-season, then maybe there are surprises in store and a grand final berth is possible.

The Entertainer Dubai Dingoes finished last in the 2017/18 season. The club knew that they had to address weaknesses to improve and it will be interesting to see if they have. They have been active in trying to recruit, but cards are close to their chests about how successful they have been. It will be interesting to see how they address the challenge of improving on last season.

It marks an exciting season ahead for the AFL Middle East, made all the more exciting by the two year naming rights sponsorship from the Entertainer.

Thanks to Wesley Hull from World Footy News for the article.