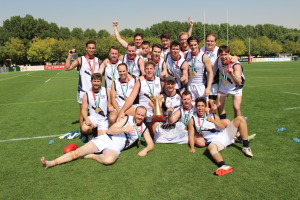 The Bulls began well and were unlucky with a few missed set shots, before Ryan Perkins got the first points on the board for Dragons.

Bulls skipper Nathan Holly and forward Ted Stobart then answered with a important goals. Dragons big man Daniel Gribbin closed the difference to just three points at the end of the first quarter.

In the second quarter, much of the momentum was largely going the Bulls’ way but they suffered a blow when Ted Stobart picked up an injury which saw the game halted.

The stoppage allowed Dragons to recalibrate and they went on to get the next two goals to help command a narrow half-time lead of 5 5 35 to the Bulls’ 3 6 24.

In a closely-fought third quarter, it was the Dragons who broke the deadlock with vital goals through Ryan Perkins and Jake Kane. But there was still time for Jack Egan to kick a team lifting goal after the three-quarter time siren to reduce the deficit for Bulls to three goals.

With all to play for, Bulls threw one last major challenge at the Dragons in the last quarter when players Gerry Tubridy and Nick Burchell kicked back-to-back goals.

That saw the margin to just 10 points half-way through the final quarter, but Dragons found that extra kick. Perkins marked 34 metres out and calmly went back and slotted the sealer. Mark Nancarrow kicked another goal late on to complete another AFL Middle East title and their sixth in seven seasons.

Best on ground for the day was Jake Kane who capped off a remarkable first season with the Dragons as he also won the League Best & Fairest voted by the umpires.

Nathan Holly, Captain/Coach of the Bulls had this to say post match.
"Although we walked away as runners up for the forth year in a row, the team are extremely proud of our efforts on the day and throughout the season.
We felt on the day we played our fast paced attacking game plan but were out played by the very skilful Dragons outfit.
As the rivalry grows stronger so does the hunger for that elusive first premiership. We will now enjoy the summer break before returning to preseason training in early September."

“I had plenty of belief in our players and yes we had the right to go in as favourites. But you can never be very confident as Grand Finals never follow a script,” he said.

“We knew the Bulls would come out strong and they had their tails up in the first quarter. We were just lucky that they missed a few shots on goal so we kept in touch. The boys stuck to the task and did the simple things well and the ball seemed to start bouncing started our way.”

He added: “To their credit the Bulls never went away but we’re lucky to have strong leaders that stepped up when it was needed. To go through the season undefeated is an incredible effort regardless of code or competition, and especially considering we had a completely new look this year. Premierships never come easy and to win four straight is unbelievable for our club. We’ll be enjoying this one for a while, that’s for sure.”