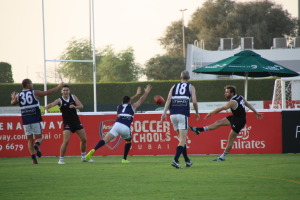 The Multiplex Bulls and the Dubai Dragons have firmly established themselves as the teams to beat in the AFL Middle East as the frontrunners both recorded commanding victories in Round 3.

In the match of the round the Bulls were far too good for the Abu Dhabi Falcons at The Sevens Stadium on Friday.

The game developed into a tight midfield contest with Jack Egan a class above for the Bulls, kicking five goals. Ted Stobart was also threatening all day for Multiplex, landing three goals, while Cam La Fontaine’s aerial work in defence was exceptional, keeping the Falcons quiet.

The Bulls held a 32-point lead by the main break and had the answers to anything the Falcons threw at them.

The second half was tighter but the Falcons just could not bridge the gap, with last season’s runners up going on to record a valuable 41 point victory – 15.14.104 to 9.9.63.

The previous night saw the Dubai derby between the Dingoes and the Dragons. Dragons captain Ryan Perkins won the toss and chose to take the advantage but it didn’t go quite to plan with the Dragons kicking 2.9 to Dingoes’ 1 goal straight in the first quarter.

From then on the Dragons were never really challenged on the scoreboard but the Dingoes at least stayed physical during the game and made the Dragons work for their 68-point win.

The margin would have been greater but the premiers had an off night with the boot in the windy conditions, kicking 13.24.102.

Spencer Whitaker was outstanding for the Dragons in the ruck and running defender Justin McGowan was in his element.

For the Dingoes, Jess McGuirk kicked three goals in their total of 5.4.34 while first-gamer Irishman Shane Fowley impressed after switching codes from Gaelic Football to Australian Rules.

Thanks to Alex Broun from Sport360 for the article.