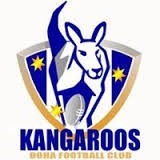 Australian Rules football in the Middle East is unique – and at times problematic. Unlike most leagues that play their games with teams from within a country, AFL Middle East (Like AFL Asia) is a competition played amongst nations. The traditional nations in the league – United Arab Emirates, Qatar, Oman and Bahrain – have held the league together through many formats over the years depending of the availability of teams for that season.

But the political, economic, social and geographical challenges involved across this part of the world have conspired to halt the progress of some clubs – the latest being the Doha Kangaroos from Qatar. Just three seasons ago, the Kangaroos claimed their maiden AFL Middle East premiership. Now, after a period of travel instability across the region, mainly political in nature, the Kangaroos will sit out the remainder of the 2017/18 season.

In the following brief from AFL Middle East, the situation is explained.

“The league and all clubs sat down to discuss the issue after it was highlighted that flights to Doha would be extremely expensive for the UAE based clubs, especially when Doha use to be a 1 hour flight and it is now 4-5 hours minimum with a stopover.
All options were looked at, including playing the games in Bahrain in Muscat but unfortunately Doha could not commit to enough players to field a team for 3 international trips
The final decision was made by all clubs, and the league, that Doha will withdraw from the 2017/18 season that was a tough and unfortunate call to make
Pitre Bourdon, President of Doha Kangaroos accepts and understands the decision. However he will endeavour to keep the club alive over the next 6 months with regular training sessions, continuing the Doha Auskick every Friday morning for the kids and even taking part in mixed international rules tournaments against the Irish (first one Friday November 17)
A one off tournament will be scheduled on January 19 in either Muscat or Bahrain that will involve all 7 affiliated clubs. Full format on the one-day tournament will be confirmed shortly.
The fixture looks likely to change with the scheduled Jan 12 Falcons v Dragons game being moved to March 2. Grand Final will remain March 16.
The future of Doha in AFLME unfortunately rests on powers much bigger than the league and hopefully the travel ban between the GCC countries will be lifted over the next 12 months.”

The Bahrain Suns are looking at a possible return to the league for the 2018/19 season.(see:Bahrain Taking Steps Towards AFL Middle East Return) No clear timeline exists for the return of the Muscat Magpies (Oman), but the door is open for their return to the league at a time that is suitable for all parties. Now the Doha Kangaroos will sit in that same position, waiting for the stars to align again to signal their return.

The remainder of the 2017/18 season will be, in terms of round by round fixture, a wholly United Arab Emirates competition featuring the three Dubai based clubs (Dragons, Dingoes and Bulls) along with the Abu Dhabi Falcons.

Article thanks to Wesley Hull from www.worldfootynews.com