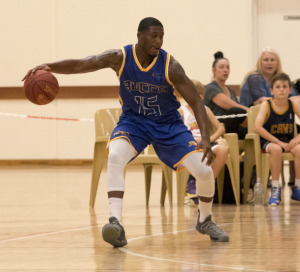 THINGS could have hardly started better for Ray Evans returning to SBL coaching duties with his Geraldton Buccaneers sitting atop the standings but he has no doubt there's plenty of further improvement in his group.

The Buccs sit on top of the Men's SBL standings with a 6-1 record ahead of a three-game home stand starting this Saturday night against the Kalamunda Eastern Suns before also hosting the Lakeside Lightning and Perth Redbacks.

Geraldton's only loss this season with Evans taking over the job left vacant by Aaron Trahair at the end of last season was at Active West Stadium at the hands of the Willetton Tigers.

But the Buccs have been undefeated on the road to date record wins over Kalamunda, Lakeside Lightning, Perry Lakes Hawks and Rockingham Flames.

There's hardly any area the Buccs don't appear to have well covered either with imports Mo Barrow and Dwayne Benjamin tremendously versatile while Mat Wundenberg and James Paringatai are experienced bigs, Jackson Hussey and Matt Hancock a strong back court with Aaron Ralph a sharpshooter still off the bench.

Despite the strong group he has at his disposal and the impressive start to the season, particularly with the four road wins, Evans has no doubt there's still plenty of improvement to come from the Buccaneers.

"It's great to be coaching again and I'm really enjoying it even though it is a lot of hard work. After being out for a few years a lot has changed and there's things I need to learn to help the team and help us keep getting better," Evans said.

"It has been a good start and getting the four away wins is a big key. It doesn’t matter who they are against, to get four away wins this early in the season has set us up nicely even though there's still a long way to go. We have to worry about Kalamunda this weekend now and they are another team on the rise who are starting to play really well."

Looking at last week's road trip, the Buccs started tremendously on Saturday night beating the Hawks at Bendat Basketball Centre 88-70 on the Saturday night on the back of restricting Perry Lakes to 10 fourth quarter points and 28 in the second half.

It is that kind of defensive effort that Evans is hoping for at least in one quarter every game.

To get that against a strong Perry Lakes team impressed him and even more so to back it up with a 85-79 victory over Rockingham the next day.

"I think the main thing with the shorter 10-minute quarters you can really restrict teams for certain quarters and that's one thing we are definitely focusing on. We want to have that one or two quarters in games where we keep teams to 10 or 15 points," he said.

"That was definitely the key against a pretty potent Perry Lakes team. We were very happy with that win even though we're still not playing at the level we want to be. I guess that's not going to ever happen this early in the season though.

"We then never were going to take Rockingham lightly and never felt safe against them. It was going to be a bit of a grind and we probably didn’t play our best, but a lot of credit to that goes for the way Rockingham played against us. We were just happy to come away with the win."

The key to the Buccs is that they have so many offensive weapons and so many different ways to hurt the opposition that makes it tremendously difficult to shut them down.

Looking at last Sunday's win over the Flames, it was Ralph off the bench who provided the spark with five three-pointers and 20 points.

Evans was glad to see Ralph stand up but there's never any question that he's capable of that and the important minutes that big man Paringatai provides are somewhat undervalued too.

"We've got so many guys who are offensive players and to have someone like Ralph come off the bench and knock down those threes just opens the court up for our other players. It really gets our team energised when he's doing that as well," Evans said.

"James has a great basketball IQ as well. He doesn’t fill up the stats sheet and sometimes you look at that and he doesn’t have many numbers, but he does the job we want him to do. In the Buccs family he is a big part of the reason why we're winning at the moment."

The Buccs back court of Hussey and Hancock could be the best without an import in the league as well.

Both have spent time at NBL clubs and have hopes of doing so again in the future, and theyare doing that cause no harm with the way they have started 2017 with Geraldton.

"It takes time with new guys playing together and we're still not playing at the level we want to, and it's a work in progress but Jackson and Matty are finding their feet playing together," he said.

"Especially this weekend, Hussey had a great two games really controlling the team and getting us over the line on both occasions."

Evans also feels blessed with the imports he has particularly because Barrow and Benjamin are both capable of doing just about anything on the basketball court and they can impact the game in so many ways.

"Those guys are doing their jobs for the team and on any given night one or both of those guys can go off, along with a number of other players in our team," Evans said.

"To have that dynamic within our team with guys who can both pretty much do anything on the basketball court obviously causes a lot of headaches for the opposition."