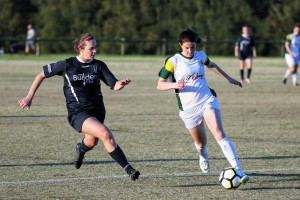 Albion Park claimed their fifth Women’s Division 1 Grand Final in a row with a hard-fought 3-0 win over a youthful University outfit. Brittany Ring opened the scoring half an hour into the match before doubling Park’s lead in the 75th minute. Park’s third trophy of 2018 was sewn up late on with Renee Crowe tapping home from close range.

Park were the dominant side for the opening exchanges, however, their best chance was a Ring header which went low and wide to the left of Grace Lockard’s goal. The Unicorns settled and managed a solid period where they looked comfortable against the considerably more experienced opposition. Despite this, they couldn't get a clear chance on goal and they would fall behind 30 minutes in. Lockard miskicked the ball to Casey-Leigh Suttle whose shot was blocked on the line by Edith Meli but the ball would fall for Ring who buried it into the back of the net.

University had two massive opportunities to hit back in the minute before halftime - both coming from the boot of Elise Battin who had been on the losing end of the last two Grand Finals. The first saw the Uni number 7 cut into the box before her shot was blocked by Jessica Hanly. Battin recovered the ball and won a free kick to the left of the area and her resulting set-piece was met by the head of Lexi Carter who couldn’t direct the ball on target from close range leaving Albion Park a goal to the good at the break.

Albion Park had the first three shots of the second half but they were all from distance. First from Liandra Gaykamangu and then two from Ring. University would have the next two chances with the first coming in the 61st minute when Battin played Kristen Gorgieski through on goal with the League’s top scorer lobing her shot wide to the left. In the 66th minute, the Unicorns won a free kick 30 metres from goal which was within Cayla Constable’s range and her strike flew just over the crossbar.

Just as University seemed set to pull off something remarkable, Albion Park flexed their muscles with two quick goals to seal the match. In the 75th minute, Ring poached the ball off the last defender before firing the ball out of Lockard’s reach and into the bottom right corner and seven minutes later, Kristina Glisic mazed her way into the right of the box before squaring the ball across the six-yard box for Crowe to tuck into the back of the net.

Despite Park delivering a hammer blow to Uni’s Grand Final hopes, the Unicorns pushed until the final minutes and were nearly rewarded after another piece of classy play from Battin. The forward powered her way past a defender before curling her shot over with just Aleisha Chessell left to beat. The consolation goal didn't eventuate for University with Albion Park winning 3-0 for the third Grand Final in a row.

The win was Albion Park's 56th in succession and it has seen them claim the last eight competitions they have contested. Park coach Richard Davis believes the success is all down to the players adding they have earnt a short break before starting their Champion of Champions defence against Marayong on September 23. Davis also felt Uni were worthy opponents who will only improve in the future.

“[They] put all the hard work and effort into it during the season and the girls deserve everything they get, they’re the ones that train hard and put the effort in,” Davis said.

“We will go away and celebrate tonight but we have another game coming up in the Champion of Champions so we’re looking forward to that.”

“[University] are a good team, I don’t doubt that next year they’re going to be a force within the Women’s Division 1 competition, so I give it to them, they played really good and we had to fight every inch of the way.”

As for University, their season comes to an end but their coach Brod Crighton admits he was delighted with the manner in which his side applied themselves and he feels the side will only improve in the years to come.

“I thought that we played some great football [today],” Crighton said.

“[We had a] new team this year, first time we’ve played together this season. We came second in the League and we have got better and better against Albion Park every time we played them.”

"I’m so proud of my girls today, they stood up, they were tough, they played great football, created opportunities to score and for most of the time we scrambled really well in defence and kept them out.”