WOMEN'S DIVISION ONE REVIEW - ROUND 8 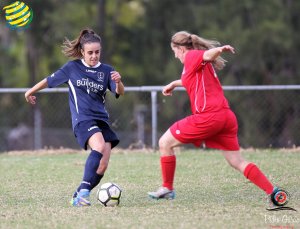 Albion Park might be striding towards another League title with another win this weekend, but it is second place University who took the headlines in Round 8 with a stunning result against Fernhill. And Uni’s Kristen Gorgieski is now the only player across all clubs to have scored in every Round, with five to her name yesterday and two in midweek against Woonona.

Kiama’s win this weekend gives the Quarriers some breathing space as sights begin to set on Finals berths, though next week’s tie against fifth placed Russell Vale could change all that if it doesn’t go their way.

Albion Park continued to show their dominance at this level with a solid 3-0 win over Russell Black, though their avalanche of goals appears to have slowed with this result coming days after Kiama limited the league leaders to just two in the midweek catch-up for Round 7.

Rylee McGartland, Renee Crowe and Brittany Ring got their names on the scoresheet yet again, though this was the first match this season in which Casey-Leigh Suttle has not scored. Suttle now has 11 goals to her name after scoring in midweek, but McGartland has now edged ahead on 12 for the season so far.

Next up for Albion Park is a visit from Balgownie, while Russell Vale have a potentially vital game against third place Kiama in Round 9.

Balgownie could have leap-frogged over Kiama in the ladder if they’d managed a win at Judy Masters Oval, but Caitlin Cardwell’s brace gave the Quarriers three points which sees them back in third spot on goal difference.

For Kiama coach Umberto Sorrentino, this was a massive win, coming so quickly after a midweek battle against Albion Park. “A couple of injuries crept in this week and we started with only one sub this weekend. She had to come on in the 10th minute, so the girls showed real determination and character to pull through this match”.

Looking ahead to next week, Sorrentino added: “The girls will have a well-earned rest now, and then tackle Russell Vale, knowing another battle is on the cards”.

For Balgownie’s Earle Canvin, the loss of the Rangers goalkeeper in the 20th minute turned this match. “We were on top until that point, but the momentum changed then and we had to reshuffle. We missed several chances to get back in the game, but it wasn’t to be this week”.

Woonona’s Sinead Bailey not only returned to the field after several weeks’ absence, but she showed what an asset she is to her side with a brace in this comfortable 4-0 win.

For Woonona coach Mick Sutton, it’s the partnership between Elyse Mcnally (who scored again this week) and Fiona Leafe which has been key to his team’s improvement. But “overall, I was very pleased with the entire effort of everyone over the last three games, and impressed by the girls who stepped up from Div 2 to replace injured players.”

Ainsley Hawes scored the other goal, her first since Woonona beat Thirroul earlier in the season in the reverse fixture.

The result ended a poor run of four consecutive losses for Woonona (including Cup ties), though performances have not always reflected those results. Next up for Woonona is a trip to nearby Fernhill, while Thirroul’s season doesn’t get any easier, with a visit to goal-hungry University in Round 9.

Kristen Gorgieski scored a remarkable five goals in this the biggest margin of victory we have yet seen in The Builders Club Women’s Division 1 this season. Coming on top of her two goals in midweek against Woonona, Gorgieski’s total tally has now reached 15 goals in just eight games.

Uni captain Elise Battin also nabbed a hat-trick, meaning she now has eight to her name for 2018. And the other goal went to another ex-Albion Park junior and former Stingray Pimwadee Polhill.

For Uni coach Brod Crighton, it was game over at 3-0 after 14 minutes: “I haven’t seen the girls that intense and in control this season. The whole team were exceptional, but special mention to Pim(wadee) and Lisa Tolson, who had their best games so far”.

For Fernhill coach Josh Sebben, “We made it easy for them. We just didn’t show up today. We look to turn this around again on our home soil next week.” And that fixture comes against Woonona, who just nicked the reverse tie 2-1 in Round 1.