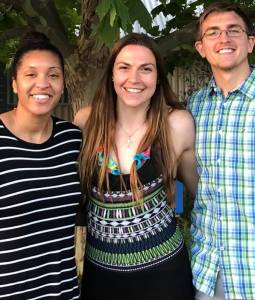 Sherrie Session is a 6’ shooting/combo guard with highly successful overseas basketball experience in Toulouse, France, where she played with team Portugal in the Liga Mediterranean Cup; and Pully, Switzerland, where she received the All Swiss LNA Honorable Mention averaging 16 points, 7 rebounds and 2 assists. Sherrie graduated from the University of Rhode Island where she played on the women’s basketball team from 2008 to 2012. In between her playing experiences, Sherrie has had two effective college assistant coaching jobs in the United States – for one season at Hope International University, and later, three seasons at John Carroll University, where she also received her Master’s degree in Communication Management. Her coaching repertoire includes overseas experience in Harare, Zimbabwe where she was the head trainer for an all girls’ camp in August 2018. Sherrie jumped at the opportunity to join the Warriors and play in Australia, but she won’t be far from her love for coaching this season either, as she will also be involved in the Aboriginal Basketball Academy. When she’s not on the basketball court, training, or sharing her expertise with younger players, Sherrie enjoys “traveling, beach days with a good book, writing and yoga.”

Teige Morrell is a 6’2’’ center/forward and an alumnus of the University of Nevada, Reno where she played on the women’s basketball team from 2014 to 2018. In the 2018 season, Teige averaged 14 points, and 9 rebounds, shooting 51% from the field, which was 3rd best in the conference. She was selected to the All Mountain West Conference Team – meaning, she was voted the best center in the conference. Teige was also named the NCAA Mountain West 2018 Woman of the Year. She received a degree in Journalism with an emphasis in visual design, and a minor in Sociology. This year with the Woodville Warriors will be her rookie year, starting off a promising professional career. When she’s not playing basketball, you would catch Teige playing with words in her travel blog or poetry portfolio. She also enjoys, “reading, listening to music, photography, and anything that requires creativity.”

David Morrell has been a successful coach in the United States for six years, coaching at the top level of club basketball and high school athletics in the state of Nevada, and running his own player development coaching business. He graduated from the University of Nevada, Reno with a Bachelor’s Degree in Biological Neuroscience, and a Master’s Degree in Special Education. He will be an assistant coach for the Premiere League women’s team, and coaching for the Warriors boys youth program as well. When he’s not on the court training his wife or others, he likes to, in his own words, “study the game of basketball, dream about the game of basketball, and discuss the game of basketball with anyone within earshot.” He also likes bubblegum and candied apples.

Sound impressive? Don’t take our word for it. Be sure to come out to the Woodville Warriors Women’s Premier League games and meet the new imports for yourself!